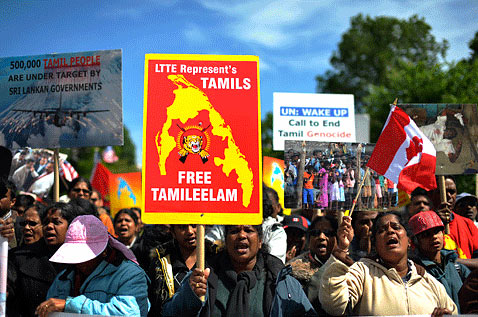 Sri Lanka’s new government has held talks with Tamil diaspora groups in London, discussing at length needs of those displaced during the war against the LTTE.

Foreign Affairs Minister Mangala Samaraweera was also present during the dialogue, the country’s main Tamil party the Tamil National Alliance said in a statement on Monday, welcoming the move.

“The Global Tamil Forum (GTF) continued their informal dialogue over the last two days in London with various stakeholders to enhance confidence building measures between all communities within and outside Sri Lanka,” the party said.

It said the need for constructive engagement by the Sri Lankan diaspora was discussed, including the needs of displaced people.

It was agreed that a further meeting will be called to present the requirements to the Colombo-based diplomatic community with the aim of raising funds for housing of over 2,000 families.

“The release of prisoners held under the Prevention of Terrorism Act (PTA) in the light of the review by the Ministry of Justice was also discussed. The TNA and the GTF further raised the issue of listing of diaspora organisations and individuals by the previous government.

“Ideas of ways in which the Sri Lankan diaspora could assist by bringing its exceptional capacity and capabilities were explored,” the release added.

Both the government and the diaspora groups had earlier denied speculation that talks in London were aimed at discussing the U.N. Human Rights Council action on Sri Lanka.

The rights body is due to present its report on the international investigation into alleged war crimes blamed on both government troops and the LTTE during the nearly three decade-long war.

The previous regime of Mahinda Rajapaksa had designated some 424 individuals and 15 Tamil diaspora organisations as terrorists and terror groups, respectively, in 2014.

The new government has pledged to review the list in the light of some goodwill measures taken to address Tamil grievances.