Sri Lanka in Super Six after another historic win 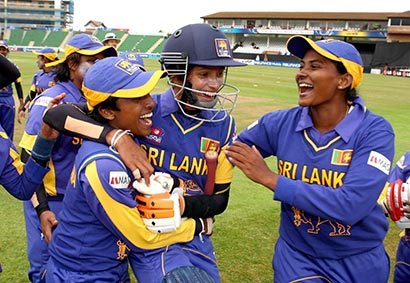 Less than a week ago, few Sri Lankans apart from the players’ families and board officials knew the country had a women’s cricket team, according to the captain Shashikala Siriwardene. On February 1, a shock last-ball win against England, for the first time ever, led to the team manager Mr Aroos being besieged by phone calls from Sri Lankan media until midnight. If Aroos manages to get any sleep tonight, he’ll be lucky.

After accounting for England, his band of girls has knocked hosts India out of the Women’s World Cup, beating another big side for the first time. Not only do they qualify for the Super Sixes, they carry with them two points, after their victory against England who have also qualified for the next stage. While it may be too early to compare them to Arjuna Ranatunga’s world beaters of 1996, the temptation could become harder to resist if Siriwardene and Co continue in the same uninhibited vein.

To beat India convincingly two days after a 209-run walloping at the hands of West Indies needed an uninhibited display alright, from cricketers who had achieved little in their careers so far. Deepika Rasangika, with a batting average of 12, swung her way to a brisk 84 at No. 3. Eshani Kaushalya, she of all those brawny boundaries against England and still having an average of 15, blasted her second frenetic 56 in five days. Yasoda Mendis and Siriwardene were there as solid bulwarks once again. In the chase, Kaushalya and Udeshika Prabodhani gave little width, unlike the India bowlers, and Mithali Raj and Co fell apart without any fight. They needed 283 to win, 251 to make the Super Six ahead of West Indies, and they folded up for 144.

Sri Lanka lost Chamari Atapattu, the trailblazer against England, to the fifth ball of the game after choosing to bat. Rasangika and Mendis responded with a century stand at five runs an over. Rasangika didn’t seem to have too many strokes, she needed little more than the cut and the slap through covers. India, especially Jhulan Goswami, kept providing her width, and she kept hitting fours. Mendis wasn’t differentiated against, and she didn’t let width go unpunished either. India looked nowhere close to breaking through at any stage of the innings, their fielding soon ceased to be of much help in stemming the run flow.

Mendis’ departure in the 25th over to a steepling mishit to mid-on with the score on 121 brought in Siriwardene, and after profiting from more width outside off, she started lofting boundaries elegantly over extra cover. A half-century stand followed which ended when Rasangika mishit to extra cover in the 40th over. Sri Lanka were 188 for 3 at that stage, already on the way to a stiff total.

Kaushalya was to put it further out of India’s reach, helping Sri Lanka take 92 off the last nine overs. Her hitting range was mostly straight, including three sixes, the last of which came off the final ball of the innings. Gouher Sultana leaked 17 runs in that last over as Kaushalya kept battering the straight boundary.

India’s chase never was as Sri Lanka gave them next to nothing to hit out against. Prabodhini, a left-armer bowling loopy inswingers with a short trundle, settled on a testing good length. Kaushalya caught Poonam Raut on the pads with one that nipped in sharply under the lights.

Raj had to fire if India were to make anything of the match. She did time a few beautiful drives through the off side but Prabodhini took her out, trapped in front pushing outside the line to an inswinger. Harmanpreet Kaur, defiant centurion against England, cut her second ball from Chamani Seneviratna to backward point. Thirush Kamini, unable to beat the infield in her 49-ball stay, edged Sripali Weerakkody awkwardly to the wicketkeeper. At 50 for 4 in the 18th over, India’s World Cup was already all but over.

When Seneviratna trapped No. 11 Shubhlakshmi Sharma in front in the 43rd over, Sri Lanka’s initial reaction said it all. They just walked smilingly towards each other, revelling silently in confirmation of their progression to the Super Six and having consigned India to the seventh-place playoff against Pakistan.

Home » Sri Lanka in Super Six after another historic win