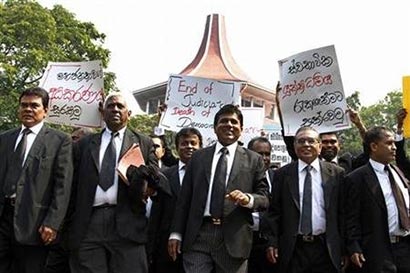 COLOMBO (Reuters) – Sri Lankan lawyers boycotted courts on Wednesday, crippling the judicial system in a protest at what they call an unfair impeachment move against the chief justice and is viewed abroad as a blow to judicial independence.

The United States, the United Nations and the Commonwealth have raised concerns about the process – which could see parliament voting next month on whether to sack her – and have called on the government to ensure the independence of the judiciary.

“Lawyers are staging a protest today in protest that the chief justice had not got an impartial, just and fair trial,” said Wijedasa Rajapaksa, an opposition legislator and the president of the Bar Association.

Hundreds of lawyers in official uniform marched in different parts of the island nation.

Some carried placards reading “hands off from judiciary” and “today judiciary, tomorrow?”, while others put up posters warning of the risks from what they called an unfair trial.

The government said the impeachment panel proceedings were in line with the constitution and the protest was not a success, as lawyers claimed.

“Their expectation was to cripple the entire judiciary. But it didn’t happen as some court houses functioned,” government spokesman Keheliya Rambukwella told Reuters.

Impeachment moves began after Bandaranayake ruled against a bill proposing a budget of 80 billion rupees for development, saying it had to be approved by nine provincial councils.

The ruling angered some of President Mahinda Rajapaksa’s backers, who accused the judiciary of overstepping its authority, while Bandaranayake’s supporters complained of political interference.

The ruling party filed a motion against Bandaranayake last month.

Parliament is expected to vote on the panel’s finding in January. The president, whose party has more than two thirds of the 225 seats, needs a simple majority to remove her from her post.

Saliya Pieris, a lawyer who represented her before the panel, issued a statement on behalf of the chief justice saying she could have proven her innocence but had not been allowed to cross examine witnesses.

Parliament speaker Chamal Rajapaksa, the president’s brother, appointed the panel, seven of whose 11 members were from the ruling party, to investigate 14 charges against Bandaranayake. On Friday she was found guilty on three of the first five charges.

The four opposition members on the panel quit on Friday, before its ruling, citing injustice, and the entire opposition party left the parliamentary chamber en masse. A day earlier Bandaranayake withdrew from the proceedings.

Lawyers and rights groups have challenged the legality of the select committee in the courts.

Diplomats who spoke to Reuters on condition of anonymity said the impeachment review had been conducted without due process or transparency.

“This gives the effect that the executive can do anything in the supreme court using its parliamentary two-thirds majority,” a diplomat from a European country said.

“We don’t have any problem with removing the chief justice. But we are concerned on the process.”