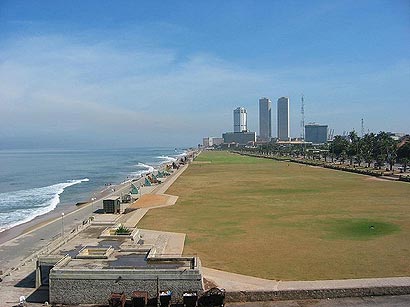 By Bruce Gale – The Straits Times

How long can an economy enjoy strong growth without a clear strategic direction?

Sri Lanka may soon be about to find out. Since the end of a 40-year civil war in 2009, this country has experienced a remarkable economic rebound. But with internal political squabbling threatening to distract policymakers from the challenges facing the economy, prospects for sustained growth are beginning to wane.

Sri Lanka’s recent economic history has indeed been impressive. The economy grew by 8 per cent in 2010 and a further 8.3 per cent last year, the fastest since independence. Growth in the tourism sector was particularly strong, with earnings last year rising by more than 41 per cent. The inflation rate has also been brought under control, holding out the possibility of lower interest rates next year.

But with exports falling, the balance of payments has remained problematic. In February, the Central Bank allowed the rupee to float. The currency subsequently fell by about 20 per cent, helping to boost exports while making imports more expensive. But while the trade deficit has since narrowed, the problem remains.

The fiscal position is also weak. After peaking at 9.9 per cent of GDP in 2009, the budget deficit declined to 8 per cent in 2010 and 6.9 per cent last year, thanks to tax reform, lower expenditures and close monitoring by the International Monetary Fund under the US$2.6 billion standby facility arrangement.

This year, the government says it is targeting a fiscal deficit equal to 6.2 per cent of GDP, and 5.8 per cent next year. But higher debt interest payments as a result of the depreciation of the rupee, plus increased expenditure on wage and welfare entitlements for government employees, have made it unlikely that these targets will be achieved. A report by Standard Chartered Bank last month estimated that the deficit could rise to 7 per cent of GDP by the end of this year.

Sri Lanka’s debt-to-GDP ratio also remains worryingly high, although it has also improved. Currently standing at about 80 per cent, it was more than 100 per cent a decade ago. But like the fiscal deficit, prospects for further improvement may be dimming. A recent move to allow local government authorities to issue municipal bonds, for example, could open up yet another avenue of state deficit spending.

Future growth will be dependent upon the extent to which the country is able to attract foreign investment.

Government statistics show that Sri Lanka received US$1 billion in foreign direct investment last year. Some observers dispute the reliability of the data, as they do with statistics regarding official debt. Everyone seems to agree, however, that current investment levels are insufficient to sustain the growth momentum.

Negative reports about human rights violations during and immediately after the war may have dissuaded some potential investors, particularly in the West.

Earlier this month, the government’s war record was again in the news, when a former Sri Lankan army officer seeking asylum in Canada claimed that his superiors had ordered him to place a bomb in the home of a well-known opposition MP. Currently, most new investment is from China.

Yet another problem is the economy’s heavy dependence on enterprises associated with President Mahinda Rajapaksa’s family and their close aides. According to Harsha de Silva, economics spokesman for the opposition United National Party, “a handful of people seem to have captured both political authority and the economy”.

The resulting allegations of cronyism are a major reason for the apparent inability of the nation’s politicians to engage in constructive debate on the problems facing the economy.

A recently released statement by a Sri Lankan citizens’ group calling itself the Friday Forum complained that “a perusal of the records of parliamentary proceedings shows that the budget debate every year descends into a political slanging match”.

What the country really needs, said the Friday Forum, is a bipartisan budget debate that “unambiguously points to the strategic direction in which the country’s economy should move”. This included a clear understanding of the success, or otherwise, of the infrastructure projects that form the lynchpin of current development strategies.

Although the Friday Forum did not mention it, the current animosity between the judiciary and the government is yet another distraction. A parliamentary panel has recently been looking into the possibility of impeaching the chief justice, a move hardly likely to strengthen foreign investor confidence in the independence of the judiciary.

Electricity demand has been falling in recent months, pointing to a slower economy. And despite the cheaper rupee, industrial exports for the first nine months are also down.

Things are going to get more difficult for the country’s economic managers from now on. It would be well if they had a practical and clearly articulated plan about how to proceed.