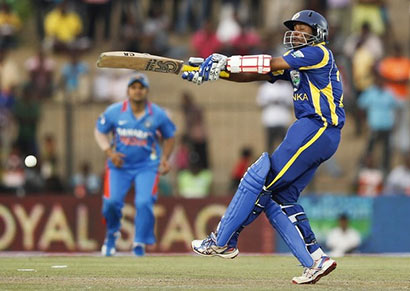 India, who won the toss and opted to bat, were shot out for 138 off 33.3 overs with only Gautam Gambhir making a noteworthy contribution with a patient 65 off 96 balls, including four fours.

Perera, with figures of three for 19, was named man of the match. Mathews took three for 14.

Sri Lanka knocked off the runs in 19.5 overs, scoring 139 for one with openers Upul Tharanga and Tillakaratne Dilshan posting a first-wicket stand of 119.

Dilshan was dismissed for 50 scored off 49 balls when he top-edged a sweep off spinner Ravichandran Ashwin for wicket-keeper Mahendra Singh Dhoni to hold on to a simple catch with Sri Lanka needing 20 for victory.

Tharanga was unbeaten on 59 scored off 60 balls with eight fours and Dinesh Chandimal was on six not out.

India looked like running away towards another huge total, as they did in the first one-dayer here which they won on Saturday, when debutant Isuru Udana conceded 17 runs in his opening over which included five wides and two crisply hit fours by Virender Sehwag.

Perera, who replaced Udana after that eventful over, turned the game around for Sri Lanka with the wicket of Sehwag (15) whom he brilliantly caught and bowled in his first over.

Off his next over, Perera had the in-form Virat Kohli edging a catch to wicket-keeper Kumar Sangakkara for one.

Both Sehwag and Kohli had been instrumental in India scoring 314-6 at the same venue three days ago by putting together a partnership of 173.

Mathews got in on the act, also picking up a wicket in his first over when Rohit Sharma played on to his stumps without scoring.

Suresh Raina (1) was out similarly to Perera in his third over, making India 41-4.

It could easily have been 41-5 had Mathews not put down a sitter offered by Dhoni before he had opened his account.

Mathews, however, compensated for that miss by having the Indian captain caught behind by Sangakkara for 11.

Ashwin (21) helped Gambhir to take the score past one hundred but ran himself out needlessly attempting an impossible third run.

Gambhir was last out attempting to guide Lasith Malinga to third man and being caught smartly by a diving Sangakkara.

The third match in the series is in Colombo on Saturday. 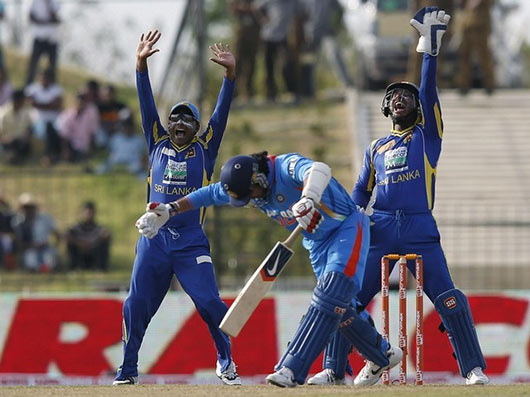