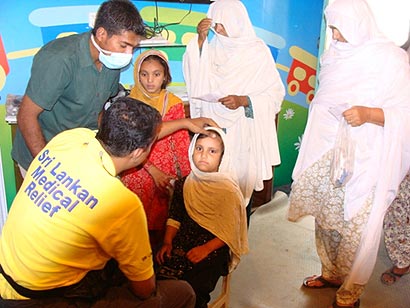 As directed by the President Mahinda Rajapaksa, a 16 Member Sri Lankan Medical Team arrived in Pakistan, with a cargo of medicine and surgical equipment, on a medical relief mission for the flood affected victims of Pakistan. The Medical Team has been treating the flood affected patients in the Charsadda District Hospital in North West Pakistan, close to the Afghan border.

According to the Director of the Charsadda District Hospital, out of the total population of 1.4 million in the Charsadda district, 900,000 people have been affected by the severe floods. He also stated that there are over 65,000 patients seeking treatment from the hospital, especially women and children and the Sri Lankan Medical Team is doing a commendable job in treating these patients. Due to the flood disaster, mainly the patients are affected by acute diarrhea, malaria, respiratory infection and skin disease.

The Sri Lankan High Commissioner in Pakistan Air Chief Marshal Jayalath Weerakkody visited the District Hospital in Charsadda and appreciated the Medical Team’s efforts to treat patients under difficult conditions in the Charsadda district of Pakistan.