Sri Lanka on a cautious path to peace – report 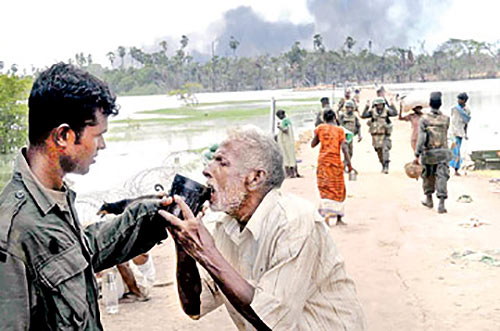 For seven years, the ethnic Tamil housewife has waited for news of a son who vanished near the frenzied end of Sri Lanka’s quarter-century-long civil war. After so much time, she has little faith that the Sinhalese-majority government will help solve such mysteries and heal old wounds.

“There is no place I haven’t gone in search of him,” said Shantha, who like many people in this teardrop-shaped tropical island nation goes by one name. She last saw her son in March 2009, when he was 23 years old and injured in the crossfire of fighting. The military promised to take him to safety. She never heard from him again.

“The government just talks about good governance, but no good seems to be coming,” she said, weeping.

For the hundreds of thousands of minority ethnic Tamils like Shantha, the government’s repeated promises of postwar reconciliation ring false, even as authorities take tentative steps toward fulfilling some of them.

Tamil rebels demanding self-rule fought the government from 1983 to 2009 before being crushed by Sri Lanka’s army. While the U.N. counts some 100,000 people killed in the fighting, rights groups believe the number was much higher, including some 40,000 civilians believed to have been killed in the war’s final months.

Former President Mahinda Rajapaksa led the military in crushing the rebellion and continued to rule until last year, when he lost an election to Maithripala Sirisena. Many expected a new era of national healing and atonement, but more than a year later, there has only been slow progress as Sirisena cautiously balances the anguished demands of the Tamils with the persistent fears of the Sinhalese majority.

His government has handed back some of the property seized by the army, discontinued the military’s involvement in civil administration and policing, and lifted bans on some Tamil expatriate groups that had previously supported the rebels’ separatist cause, with the aim of opening communications with them. Sinhalese nationalist groups are already rallying against these moves.

“Building reconciliation aimed at non-recurrence of violence can never be done with bricks, cement, iron, sand or any other material,” Sirisena said.
“It’s about bringing people’s minds together; uniting hurting minds; uniting minds full of hatred.”

Changes are not coming fast enough for many Tamils, tens of thousands of whom have been homeless since the military bombed their homes or took their land. Jobs are hard to come by. Families are desperate for news on missing relatives. Many have refused to accept death certificates offered by the previous government and wait for information on what actually happened to them.

The mistrust between Tamils and Sinhalese goes back centuries, to when Tamil kings invaded from present-day southern India. Sri Lanka’s Tamil-majority northern region was among the first to embrace English schools set up by British missionaries. Tamils dominated high-level jobs in government, medicine and law, creating a notion among the Sinhalese that they were being marginalized.

After Sri Lanka gained independence from Britain in 1948, Sinhalese took control of the country and it was the Tamils who felt marginalized, setting the stage for the rebel movement.

During the fighting, both sides were accused of committing war crimes, though the allegations have never been investigated.

When he was president, Rajapaksa refused international oversight over any war-crimes inquiries and denied allegations that troops had executed prisoners, targeted civilians and hospitals and blocked food and medicine shipments to civilians living in rebel-held areas. Rebels, meanwhile, were accused of recruiting child soldiers, using civilians as human shields and killing people who tried to flee their control.

A documentary aired in 2010 by Britain’s Channel 4 TV station showed scores of naked, blindfolded prisoners being executed by soldiers. The video was apparently captured by troops on their mobile phones as souvenirs. Rajapaksa said the documentary was a fabrication, but Sirisena’s foreign minister, Mangala Samaraweera, said last month that it was authentic, in what was seen as a major step toward acknowledging crimes.

Observers said part of the problem is that Sinhalese were fed a heavy dose of triumphalism after the war.

Among the Sinhalese, “there is hardly any awareness of the need for special measures for reconciliation,” said Jehan Perera, head of the local peace activist group National Peace Council. And those measures “will create apprehension in the southern people, which is why the government is progressing slowly.”

In the next U.N. Human Rights Council sessions starting June 13, the High Commissioner for Human Rights is set to brief on Sri Lanka’s progress toward reconciliation.

The Cabinet created an office to find missing people, though rights groups say it is being set up without consulting victims’ families as promised. The government has also promised various reforms intended to prevent a return of hostilities, but several have yet to be implemented.

The delays feed frustrations among Tamils waiting for the return of their land, for justice for war abuses or for knowledge of what happened to missing loved ones.

In the Tamil-majority Jaffna Peninsula in the north, 68-year-old Kasuthuri is impatient to regain her house and land where her family grew vegetables and reared cattle. The military declared it part of an off-limits high-security zone nearly three decades ago.

“When the president visited us, he promised we can go back home within six months,” she said. That was five months ago, and nothing has been said since.

But she is glad she can now at least air her grievances. “If it was the previous government,” she said, “I would have ended up being abducted.”

Home » Sri Lanka on a cautious path to peace – report