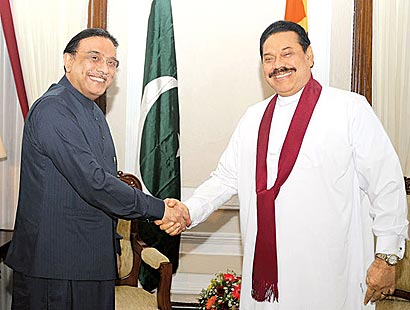 Pakistani President Asif Ali Zardari who is on a four day visit to Sri Lanka called on President Mahinda Rajapaksa and held bi-lateral talks at the Presidential Secretariat last evening. Before the commencement of the talks between the delegations,a One-on-One Meeting took place between the Sri Lankan President and the visiting President of Pakistan for nearly an hour.

Four agreements relating to visa abolition of diplomatic and officials passports, agricultural cooperation and assistance in customs matters and an agreement in the fields of arts and creative studies were signed between Sri Lanka and Pakistan yesterday following bilateral talks.

The two leaders also discussed the strengthening of trade cooperation between the two countries in all spheres including the possibilities of exporting Sri Lanka tea and gems to Pakistan. President Zardari requested President Rajapaksa to provide the technical know-how utilized in Sri Lanka’s gem industry to Pakistan.

President Zardari also congratulated Sri Lanka on progress achieved in the health sector while expressed his willingness to employ Sri Lankan nurses as trainee instructors in Pakistan. He also made a request to President Rajapaksa to provide the services of Sri Lankan English and Mathematics teachers to upgrade the education system in Pakistan. President Mahinda Rajapaksa said the visit of President Asif Ali Zardari, just after his swearing-in for a second term in office, has further helped strengthen ties between the two countries.

President Rajapaksa also requested the Pakistani President to direct more Pakistani investors to come to Sri Lanka since a conducive environment has been created along with the required infrastructure facilities for them.

The Pakistani President also praised President Rajapaksa on the implementation of the “Mathata Thitha” program which saved our future generation from the drug menace while emphasizing the need for a joint program of this nature to be implemented at regional level.