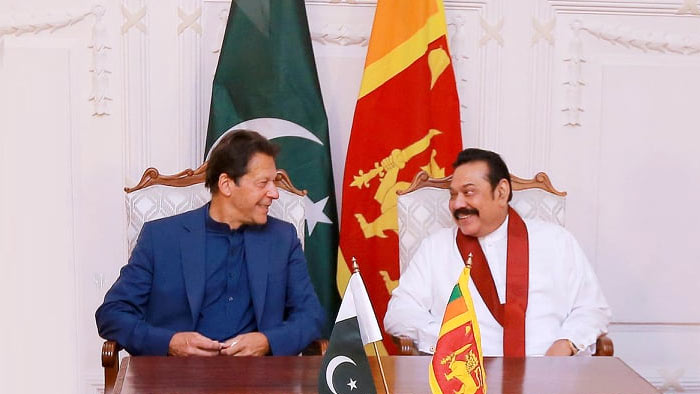 Pakistan Prime Minister Imran Khan who is the first Head of State to visit Sri Lanka since the General Elections in 2019 arrived yesterday on a two-day official visit on an invitation extended by Prime Minister Mahinda Rajapaksa.

“During our bilateral discussions earlier this evening, we agreed to work closely towards enhancing our bilateral cooperation in the economic sector and a number of other areas including trade, investment, science, technology, defence and education,” Prime Minister Rajapaksa said. “We also agreed to pursue the opportunities presented within the framework of the Pakistan-Sri Lanka Free Trade Agreement. Our talks also focused on important regional and international issues as well as the impact of the Coronavirus pandemic.”

Another landmark decision was taken to restart Parliamentary interaction through the Pakistan – Sri Lanka Parliamentary Friendship Groups. “Sri Lanka believes that political stability and regional peace will be the key to achieve sustainable development, economic growth and prosperity in South Asia. We agreed to continue with the current mechanism to curb illegal drug trafficking, arms smuggling and other illegal activities by sharing information through the relevant agencies.”

The Pakistani Premier has also offered his nation’s support in the field of sports particularly assistance to enhance sports training facilities in the country. Today the Pakistani Prime Minister will preside over a business and investment forum. The Premier is accompanied by a strong multi-sector business delegation from Pakistan.

PM Khan is accompanied by a high-level delegation, including members of the Cabinet and senior government officials including Foreign Minister Shah Mahmood Qureshi.