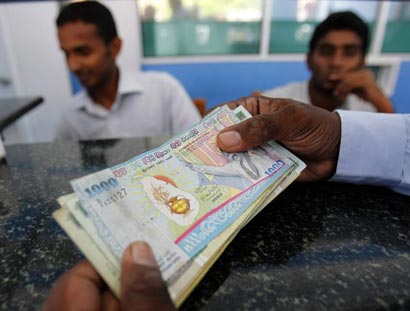 Sri Lanka’s central bank on Tuesday raised fixed deposit rates for some savers aged over 60 to 12 percent, as promised in the 2015 budget and ahead of a Jan. 8 snap presidential poll.

All deposit holders above 60 years and holding fixed deposits of 2.5 million rupees ($19,000) in licensed banks will receive an annual interest income of up 300,000 rupees, the central bank said in a statement.

The new scheme comes days ahead of a vote in which President Mahinda Rajapaksa is seeking an unprecedented third term but faces a stiff challenge from his former health minister, Mithripala Sirisena.

With around 12 percent of the population over 60, the senior citizen vote is a big prize in a tight race.

The central bank has reduced its policy interest rates to record lows to boost private sector credit and spur economic growth. The repurchase rate has been at to 6.5 percent and reverse repurchase rate at 8.0 percent since January.

However, the fall in deposit rates has adversely affected older savers who can depend on the interest for their income. It was not immediately clear how many savers would be affected by the new rate.

Rajapaksa, also the finance minister, proposed the 12 percent return for senior citizens for fixed deposits in state banks when presenting the 2015 budget in October.