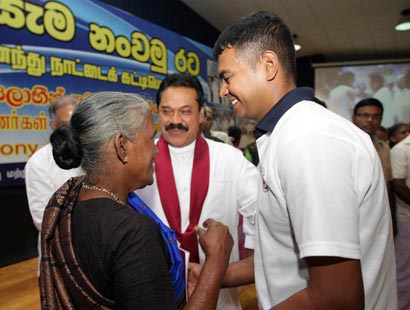 The Government of Sri Lanka is reintegrated 1800 rehabilitated former LTTE cadres into society at a ceremony held at Temple Trees today on 30 September. The Ministry of Rehabilitation and Prison Reforms organized this special ceremony in view of socializing rehabilitated ex-Tamil Tiger combatants.

President Mahinda Rajapaksa handed over the rehabilitated former members of Liberation Tigers of Tamil Eelam who have undergone a two-year rehabilitation program after eradication of a three-decade of terrorism in May 2009. Parents and the family members rejoiced the reunion of their children after the completion of successful rehabilitation for more than two years.

Addressing the ceremony President Mahinda Rajapaksa said that first of all he wished to extend a warm welcome to those rehabilitated former combatants to Temple Trees. He wished them all success and brighter futures. Everyone desired to live in freedom and also with their family members. They were misguided and therefore they lost this opportunity and deprived to live as free citizens in the past. It is of no use weeping by looking back. What should be done is to forget the dark era and look for a new life. He also told them that they were entering the society as normal citizens and enjoy all benefits in the society. They were trained according to accepted norms and there will be no restrictions or obstructions.

The President further stated that numerous foreign elements are trying to use the rehabilitated youth into many anti-social acts while they are enjoying luxury lives in the Western world. Human lives should not be allowed to be destroyed to fulfill the needs of such malevolence groups.

The youth who had undergone the process where they were taught self-employment skills and English language training in 24 rehabilitation centers were allowed to reunite with the families. The ex-combatants had been given training in business skills, clerical, administration, masonry, plumbing, carpentry and various arts and crafts. Some were also trained as psychologists and computer programmers.  Some of the rehabilitated cadres had secured foreign jobs. They were being released as productive persons to society.

President Rajapaksa has said that by socializing those who had taken to arms, after necessary vocational training to live in society as decent citizens was a significant achievement of the government. The President made a fervent request from them to make optimum use of the training they received and do some service on behalf of their country.

The President pointed out that roads, bridges, schools, hospitals, government building and houses that were ravaged were being rebuilt. The devastated areas were being built for the benefit of the people and help them guide a better life. It may be the North, the East or the South, everyone is citizens of this country and they enjoy equal privileges. He emphasized that he was not prepared to discriminate any person. He also said he is not prepared to treat the north in a manner different from the ways of treating the south. The President further reiterates that time has come for all to get together to build the country rather than remain divided. It is not a difficult task of building the country through unity.

The President also addressed the gathering in Tamil.

Expressing his views on the occasion Minister of Rehabilitation and Prison Reforms Chandrasiri Gajadheera called on these rehabilitated ex-combatants to fulfill their responsibilities towards the country sans being subjugated by opportunism or communalism. The Minister said that the rehabilitation programme was implemented according to the needs and the standards of the present day society. The Minister further said that he received strong assistance from Minister of Youth Affairs and skill Development Dullas Alahapperuma and Deputy Minister Lakshman Yapa Abeywardena.

Prior to the ceremony, ex-combatants were being given the opportunity of meeting the President. The former Tamil Tiger cadres were among about 11,000 LTTE fighters who underwent vocational training in military-run rehabilitation centres after they surrendered following the eradication of terrorism in May 2009. Officials said there are nearly 10,000 former LTTE cadres have been through the successful rehabilitation process and over a thousand more have been continued rehabilitation as a result of the court procedure. They will be released only after the legal process.

The Australian High Commissioner, Kathy Klugman, the US Ambassador in Colombo, Patricia Butenis, British High Commissioner to Sri Lanka and the Maldives, John Rankin, Indian High Commissioner in Colombo, Ashok Kantha and Ambassador of Japan to Sri Lanka, Kunio Takahashi also handed over rehabilitated former Tiger cadres to their parents.
Government Ministers, several parliamentarians, Colombo based foreign diplomats, members of the Sri Lankan Armed Forces, Ministry Secretaries officials and large number of parents and their family members were among those present on this historic occasion.

Pictures are seen here former cadres being handed over to their parents by President Mahinda Rajapaksa and by the Government Ministers and foreign diplomats in the presence of President Rajapaksa. 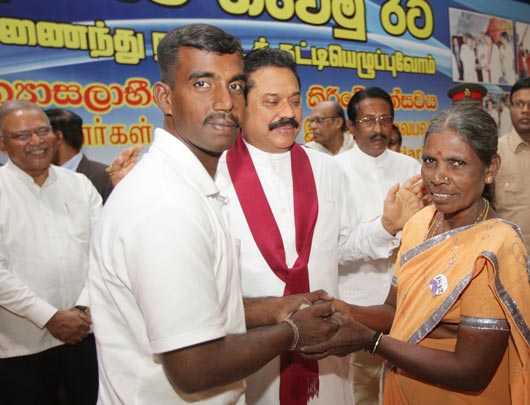 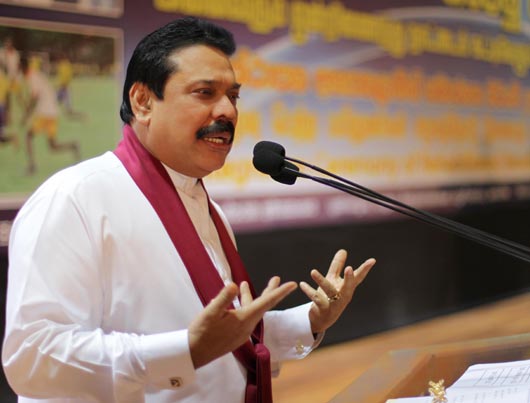 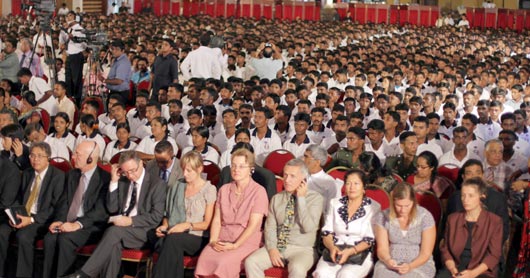