We will win this time too: Muzammil 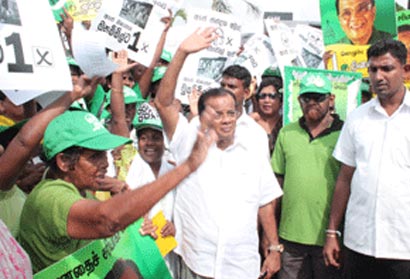 “The UNP election campaign in Colombo is going smoothly though the government is trying its best to get the support of various sectors in the city. This time more and more people in the city will come to vote as a strong protest against the policies of the government. It is clear that people of all city zones are rallying round us,” Muzammil told The Nation.

Asked for a comment on the latest situation in the UNP election campaign in the city he said the campaign was going on successfully and today the citizens of Colombo are very much in favour of the UNP.

“We have gone round meeting the people at the grassroots level in the city and they are not at all happy with the policies of the UPFA government. Therefore it is going to be a massive protest vote this time. Even the poor people who live in shanty towns within the city are with us and would not support the UPFA candidates and we are sure about winning the municipal council election,” he said.

“On the other hand the government was using all its power and resources to get the support of the voters. They have approached even the parents of pre-school children and have called for meetings of parents of school children to strengthen their election campaign and in fact have gone out to reach the people of the lower income groups but the people are aware that the government was not going to do anything to improve their lot. On the other hand the people of Colombo have confidence in the UNP. We have seen very clearly in our campaign that the citizens of Colombo will back the UNP candidates as they have no faith in the UPFA,” he noted.

The government is holding out promises to the people of Colombo but they are aware that those promises will not be fulfilled. Recently they called the parents of the Royal College in an attempt to gain their support for the government candidates. At Maligawatte they have attempted to canvass the support of the parents of pre-school children but we are aware that all such tactics will not help the UPFA’s candidates in the fray. In our election campaign we visit all the people of Colombo and as far as possible we speak to all these people and our confidence in winning the forthcoming municipal election grows,” he observed.

“The UPFA candidates have met the heads of Buddhist temples, Hindu shrines, Christian churches and mosques but the policies of the government that people know will not help win this election. I would emphatically say that the people of Colombo are with the UNP and will vote for us during this election also,” Muzammil said.

Asked about the challenge he made to the UPFA mayoral candidate Milinda Moragoda to come for a public debate, he said he had written to Moragoda asking him to come for a debate on the policies of the UNP and UPFA with an independent moderator to be telecast over national TV but the latter had failed to acknowledge or reply his letter.

“I wanted an independent moderator but Moragoda has his friends in the media and wanted to have the debate in the Swarnavahini TV channel on a particular programme which I believe will not be moderated by an independent person. It appeared that he was not interested in the debate as I had proposed and in the absence of an independent observer I was not prepared to have that debate,” he explained.

However he was still prepared to go for the debate on condition that it would be with an independent moderator not with certain media persons who are with Moragoda.

“Our election campaign is strong and we have the support of all sectors and sections of Colombo’s voters who have confidence in the UNP that stands as a political party that represents all the ethnic and religious groups in the country. We are fully confident of winning and even with the entire government machinery working to woo the voters of Colombo, we will win this election,” he added.

12 Responses to We will win this time too: Muzammil

Home » We will win this time too: Muzammil