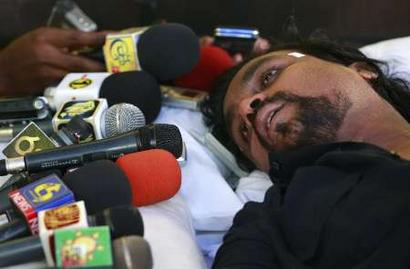 COLOMBO (AFP) – Sri Lanka said Friday that UN chief Ban Ki-moon had “acted in haste” by recalling his top envoy on the island in response to angry protests over a UN war crimes panel.

Foreign Minister Gamini Lakshman Peiris said the government had told Ban’s chief representative Neil Buhne that the days of protests outside the main UN office in Colombo would end on Friday.

“Given that background, the UN secretary-general acted in haste by asking Mr Buhne to come to New York,” Peiris told parliament, adding that his government “regretted” the move.

However, the sit-down protest outside the main UN compound dragged into the night on Friday with no sign of ending.

The UN’s main office in Colombo has been virtually under siege since Tuesday from demonstrators demanding that Ban halt a UN probe into alleged rights abuses during the final stages of Sri Lanka’s civil war.

The protests have been led by Housing Minister Wimal Weerawansa, who has begun what he says will be a hunger strike to the death outside the UN compound.

Top diplomatic representatives in Colombo from Britain, France, Germany, Italy, the Netherlands, Norway, Romania, Switzerland, US and the European Union delegation expressed “dismay” over the blockade of the UN office.

“Peaceful protest is part of any democracy, but blocking access to the United Nations — of which Sri Lanka itself is a member — as well as intimidating and harassing UN personnel is a breach of international norms and harmful to Sri Lanka’s reputation in the world,” they said in a joint statement.

It asked Sri Lanka to ensure the safety and security of UN personnel and premises.

Weerawansa said Friday he was resigning his cabinet seat to deflect criticism that his agitation was being orchestrated by the government.

“I have no intention of causing embarrassment for the government,” he said in a letter to President Mahinda Rajapakse. “I choose to resign from cabinet and keep up my struggle.”

The protests prompted Ban on Thursday to recall Buhne and shut down a UN office.

The United Nations Development Programme in Colombo said its country office for Sri Lanka was not closing, but the UN’s Colombo-based Regional Centre for Asia and Pacific was shutting down.

The Regional Centre provided “policy advice and services for countries throughout Asia and the Pacific,” the UN said.

Other UN agencies in Sri Lanka, however, will continue to function, the UN office in Colombo said, while Sri Lanka’s foreign ministry said the closure of the Regional Centre would affect 34 nations in the region and the move was “disappointing”.

Through his spokesman, the UN secretary-general urged Sri Lanka to “live up to its responsibilities” as a sovereign host of UN agencies.

It is “unacceptable that the Sri Lankan authorities have failed to prevent the disruption of the normal functioning of the United Nations offices in Colombo as a result of unruly protests organised and led by a cabinet minister of the government”, Ban’s spokesman said.

“The minister is adamant. He will keep up the fast,” Weerawansa’s spokesman Anuruddha Bandara told AFP.

The minister’s supporters marched to the Russian embassy Friday to seek Moscow’s support in quashing the UN probe.

Russia’s foreign ministry had criticised Ban for not conferring with the UN Security Council or the General Assembly before convening the investigating panel. 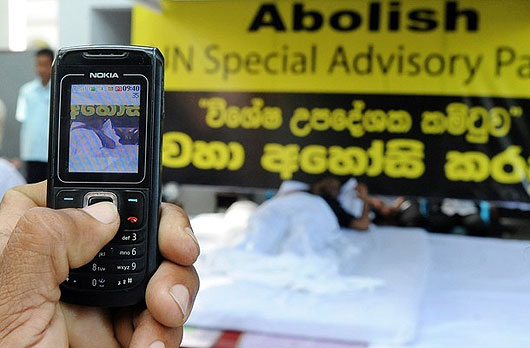 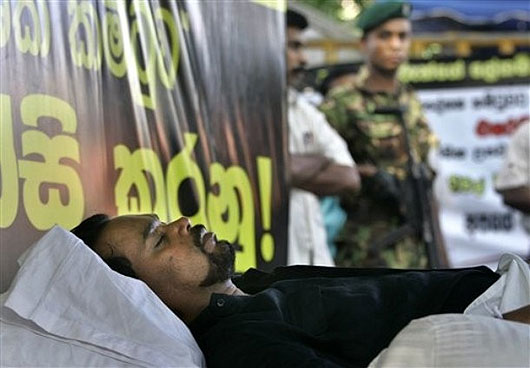 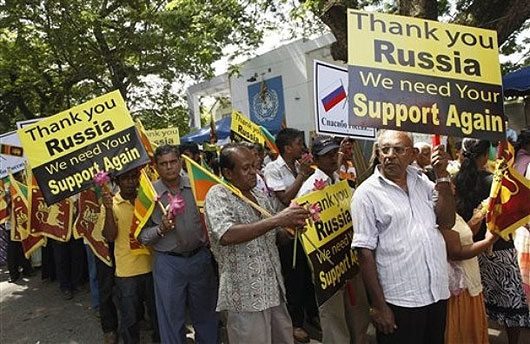