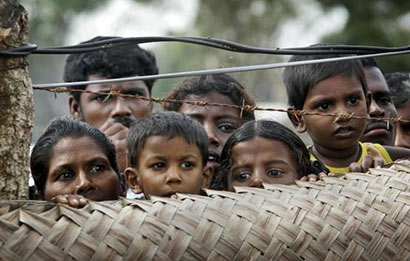 The efforts to bring down the curtain to the investigation on Sri Lanka will be to pin the argument of command responsibility thus enabling key heads already named to be indicted for war crimes, crimes against humanity and so forth. Nevertheless, for any war crime allegations to hold water there must first be bodies of dead to prove a crime has been committed. As things stand neither do we have bodies nor do we have names of the dead. What a preposterous situation when we have only allegations but nothing to substantiate them except experts from overseas spending colossal amounts of someone’s money to produce reports of ‘credible witnesses’ but none of them able to produce even a skeleton!

“ The hostilities are now taking place in a very narrow stretch of land along the eastern coastline of Sri Lanka. And within that narrow stretch, which had been declared a ‘no-fire zone’ by the government, tens of thousands of civilians remain trapped. At present we put their estimate at 50,000,”

28days before the LTTE was eliminated the ICRC placed the number of civilians as 50,000.