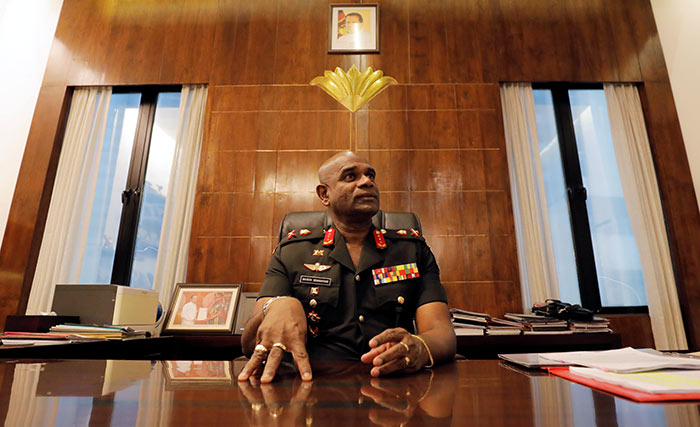 Sri Lanka’s army on Thursday defended its decision to reinstate an intelligence official arrested in 2017 on suspicion he attacked journalists, saying he is the right person to investigate the Easter bombings claimed by Islamic State.

Major Prabath Bulathwatte was arrested on suspicion he assisted in the abduction and torture of Sri Lankan editor Keith Noyahr in 2008. He was also accused in the murder of Lasantha Wickrematunga, an outspoken editor of The Sunday Leader newspaper, who was killed in 2009 while stuck in rush hour traffic in Colombo, according to police and prosecutors.

Bulathwatte, 45, has not been convicted and was released on bail in 2018, state-run media reported.

A lawyer representing Bulathwatte in 2017 said he was being “politically victimized”, according to a local media report at the time. A military spokesman was not immediately able to provide Reuters with contact details for Bulathwatte.

Sri Lanka’s army commander Mahesh Senanayake said he was reinstating Bulathwatte due to his knowledge of the Eastern Province, home to the Muslim-majority town of Kattankudy where two of the bombers came from, as well as his previous work monitoring Islamist groups.

More than 250 people were killed in the April 21 attacks on churches and hotels, mostly in Colombo.

“We should be able to use the best resources available within the army to fight this… I am trying to restore the peace and normalcy in minimum time,” Senanayake said at a news conference on Thursday.

Rights groups have decried the decision.

“Promoting to active duty an intelligence officer who has been implicated in the killing of one journalist and the torture of two others severely undermines Sri Lanka’s claim that it is fighting impunity for crimes against journalists,” The Committee to Protect Journalists’ Asia Program Coordinator Steven Butler said in a statement on Wednesday.

Since the end of the war in 2009, Sri Lanka’s former defense secretary Gotabaya Rajapaksa, who oversaw the crushing of Tamil Tiger rebels under his brother, has been accused by rights groups of multiple crimes during the civil war, including extrajudicial killings.

Wickrematunga’s daughter Ahimsa filed a complaint for damages from Gotabaya earlier this year in California for allegedly instigating and authorizing the extrajudicial killing of her father. Ahimsa did not immediately respond to a request for comment on Bulathwatte’s reinstatement.

Gotabaya, who recently told Reuters he was running for office in this year’s election, has rejected the allegations as politically-motivated and designed to weaken the military.