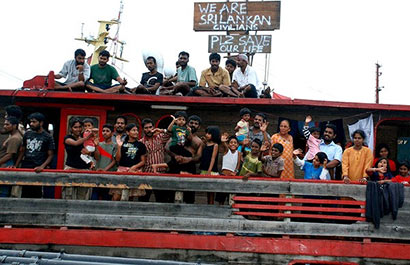 The Sri Lankan military says it has not intercepted a boatload of Tamil asylum seekers bound for Australia refuting reports the Sri Lankan Navy were preparing to pick them up mid-ocean.

The Sri Lankan military says it has not intercepted a boatload of Tamil asylum seekers bound for Australia and it has no plans to do so.

The boat, believed to be carrying 150 asylum seekers including 37 children, has not been contactable since the weekend, indicating it may have been intercepted by the Australian Navy or Customs.

Those on board claim they are Sri Lankan, but began their voyage in India which is home to many Tamil refugee camps.

Refugee groups are concerned Australia handed the group over to the Sri Lankan Navy.

But a spokesman for the Sri Lankan military told the ABC that has not happened.

“There is no plan for the Sri Lankan Navy to take over asylum seekers bound for Australia from [the] Australian Navy,” he said.

The spokesman says he believes Australia is taking them to Christmas Island.

The Australian Government is refusing to confirm or deny the boat’s existence or its possible whereabouts.

However, The Australian newspaper is reporting a Sri Lankan Navy boat was last night preparing to pick up the asylum seekers mid-ocean from Australian authorities.

Immigration Minister Scott Morrison has declined to comment on reports the boat had been intercepted, saying that starving people smugglers of information about their boats had successfully stopped them.

“In accordance with the policy established by the Operation Sovereign Borders Joint Agency Task Force commander, the Government does not comment on speculation or reporting regarding on-water operations,” a spokesman for Mr Morrison said.

“The Government will continue to act in accordance with our international obligations, including applicable international conventions and to protect the safety of life at sea.”

Mr Morrison accused Labor and the Greens of “doing the bidding of smugglers” by asking about the fate of the boats.

Greens leader Christine Milne says sending asylum seekers back to Sri Lanka is the equivalent of sending the persecuted back to the persecutors.

“They have a shocking reputation for human rights,” she told a press conference this morning.

“It is now up to Prime Minister Abbott. Prime Minister tell Australians – are you going to send 153 people back to the people who have persecuted them?

“Is that what this nation has become under your leadership? Because I think the overwhelming majority of Australians will be horrified by this.

“Not only is it shocking and cruel for the people who have been persecuted and are being treated like this, but it is absolutely in breach of our obligations under the refugee convention.”

Local authorities in India say they are not aware of any asylum seeker boat leaving the country’s shores, ABC reports.