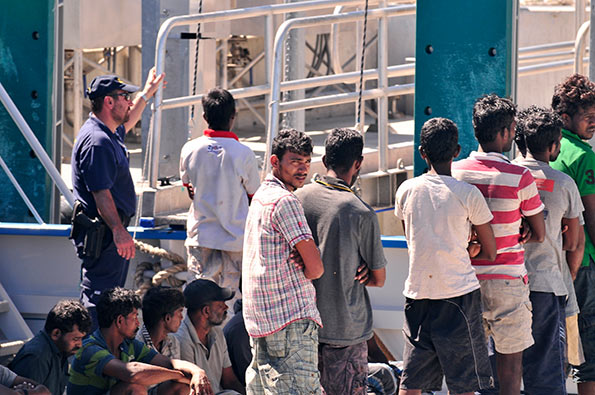 Refugee activists have called on the southern Indian state of Tamil Nadu to ease restrictions on Sri Lankan refugees living in guarded camps after police intercepted a group who had escaped and were attempting to migrate to Australia.

Campaigners said the case showed how desperate Sri Lankan refugees were to flee India where they have been confined to closed camps for years and have no right to work.

“They are desperate people looking for a dignified life,” said P Pugalenthi, a lawyer who represents refugees in Chennai.

“They are practically imprisoned in camps with no freedom of movement. They need permission to step out of the camps. They cannot buy property, start a business or even legally have access to a mobile phone.”

Over 100,000 Sri Lankans are estimated to have sought refuge in southern India, particularly Tamil Nadu, during the conflict between separatist rebels and the Sri Lankan army which lasted a quarter of a century and ended in 2009.

The Tamil Nadu government runs 109 special camps, housing around 60,000 refugees. They receive an allowance, food and education. Some have been in the camps for two decades and many were born there.

The refugees say if the Indian authorities won’t grant them citizenship they should at least be given the right of free movement in the country.

On Thursday, officials intercepted a truck in Tiruvallur near Chennai where they found 33 refugees missing from four government-run camps. The refugees, including six women and six children, were planning to take a boat to Australia, police said.

“The journey they were going to embark on is very dangerous. They are just being duped by agents, who have been arrested and will be booked under both trafficking laws and the national security act,” coastal security group head Sylendra Babu told the Thomson Reuters Foundation.

Police said there had been four or five similar attempts by refugees to board boats to Australia in the last three years.

There have been reports of several suicides in the camps this year as well as protests over alleged harassment by authorities.

“Most of them are sitting in camps with no work permits or means to upgrade their skills. Living here has robbed them of their self-respect and they want to escape.”

Smugglers charge 100,000 rupees ($1502) for a one-way journey to Australia, according to investigating officials.

India has hosted many refugees from neighboring countries over the years but it has no law to define refugees and the status of the Sri Lankan refugees remains ambiguous.

The U.N. refugee agency, which has a limited mandate in India, does not have access to the camps in Tamil Nadu.

Most refugees have refused to go back to Sri Lanka saying the government there has not come up with a clear plan for their reintegration. Many lost everything in the war and cannot see how they would restart their lives.