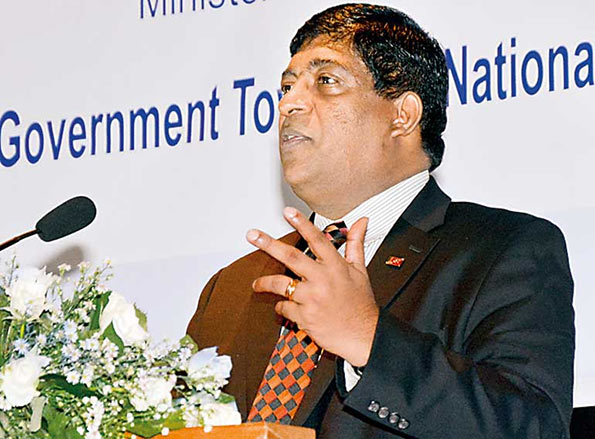 Finance Minister Ravi Karunanayake yesterday outlined the importance of having a strong National Government with a consistent set of policies towards building a more resilient national economy.

Delivering the first founders day oration of the Institute of Certified Management Accountants of Sri Lanka (CMA) titled ‘National Government towards a national economy’; Karunanayake pointed out that the Government was ironing out issues in national policies to open up the economy for a better future.

Noting that investments are necessary for nation building he stated that national planning was brought under the guidance of Premier Ranil Wickremesinghe for the key reason that no ad-hoc investments will take place. “Investors look for consistent policies and not tax holidays. The Government is addressing these issues at the moment and within the next two weeks President Maithripala Sirisena and Prime Minister will spell that out,” he asserted.

However the Minister pointed that Inland Revenue Department (IRD) income levels have still not increased and need catching up.

Thus, introducing measures such as VAT was necessary.

Karunanayake said so far the Government has signed 83 mega projects though not much publicity has been given. Projects will be considered by the merits, scrutinised under a transparent process, time-bounded and only then approval had be given.

“Within a couple of months we all can be proud of these quality projects when they are delivered,” he added.

Citing an example he said that within the past 16 months the Government has given approvals for three major expressway projects and has saved 21% of the cost compared to what the previous regime has signed during the past 6 to 7 years for similar projects.

The Minister noted that all developed countries including China are high ranked today due to their strong and consistent policies. “Being a communist country, China didn’t give anything on concessionary basis.”

In addition Karunanayake said the Monetary Act, the Banking Act and the Exchange Control Act will see some significant changes in the next three weeks.

“Today the Organisation for Economic Co-operation and Development (OECD) had its Ministerial Council Meeting (MCM). OCED helps Governments to tackle the economic, social and governance challenges of a globalised economy. Sri Lanka stands at 6th position in OCED rankings and if we can get into third or fourth position we could save up to 8% to 9% in our cost of interest,” Karunanayake said.

“The Government’s foreign policy is to be allies with everyone and best examples were the invitation to G7, EU fishery ban lift and GSP+ which will have positive results within the next 100 days.” he added.

In marching towards a knowledge based economy, education is essential and the Government is keen on making 13 years of education compulsory for all children.

“Today, labour is a big issue as most of them are underutilised. Around 2.2million Sri Lankans are working abroad when our requirement is around 300,000 to 400,000 of people in the country. To discourage this brain drain we need a strong policy, where it would pay at least $400 monthly income,” he explained.

He said lack of national planning during the past regime had cause severe damage to the economy by implementing projects such as Hambantota port and Mattala airport where costs, internal returns or return on investment (ROI) that is key factors in assessing a project have not been considered.

“Getting commercial loans are the easiest today, but getting them at 6% to 7% the burden has been passed on to all of you who are the tax payers of this country and the hard earned profits of the Sri Lanka Ports Authority (SLPA) from Colombo Port is used to set off these debts, which are not even generating a revenue of Rs.3 million a month despite its investment which is as high as Rs.58 billion,” he noted.

Stating that it was good to obtain loans, he highlighted that it should be utilised for the development and well being of the country’s citizens and not to pay off past debts.

“Just as you all, we want to reduce the taxes wherever possible. This is a temporary period, we require your confidence placed in us to steer this economy to greater heights. The comparison of a ‘VAT man’ and a ‘BAT man’ is this. Within the next few years, when we bear fruits of these measures taken today, we as accountants can feel victorious and proud,” Karunanayake concluded.

4 Responses to Stronger economy via consistency!