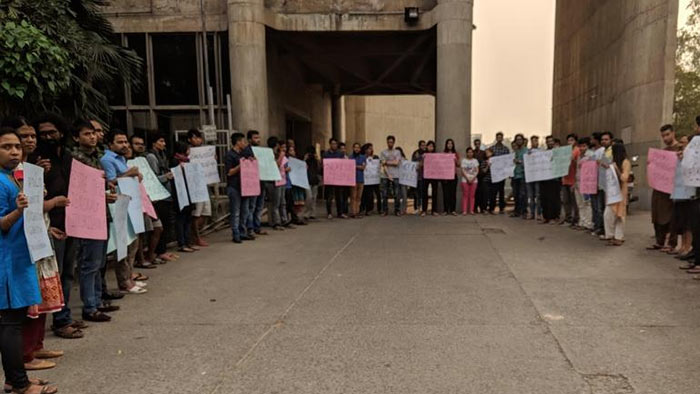 Even as Sri Lanka is under the grip of a political turmoil, the students from Sri Lanka, at South Asia University in New Delhi, held a “silent protest” against the ouster of Ranil Wickremesinghe and the appointment of Mahinda Rajapaksa as prime minister of the country.

Terming the actions by President Mathripala Sirisena as “undemocratic”, the students from Sri Lanka are demanding that parliament be convened at the earliest to decide the fate of the two leaders (Ranil and Rajapaksa).

“We don’t want to take sides. But, according to democratic traditions, the President should call the Parliament. We demand that he end this uncertainty which has already led to violence. This is what everybody demands in Sri Lanka.” — Holding a banner which said “Call the Parliament Immediately.”
– A Lankan student Kaushalya Kumarasinghe said

There are eight students studying in this university. But, many others from various other countries have joined these students in marking their protest against the turn of events in Colombo, Sri Lanka.

A letter written by these students to the Sri Lankan President was handed over to the Deputy High Commissioner at the Lankan High Commission in New Delhi.

Signed by over a 100 students from SAU, the letter says, “We, students of South Asian University, New Delhi are concerned about the developing uncertainty in the political scenario of Sri Lanka consequent to the removal of the Prime Minster Mr Ranil Wickramasinghe, and the appointment of Mr Mahinda Rajapaksa as the new Prime Minister. This act, which has been carried out amidst much secrecy and without a floor vote in Parliament has already cost people’s lives and considerable disruption of public life. At the moment, we are not debating the legality of this action in terms of the constitution. We are concerned of the ethics of the action and the political uncertainty it may push the country into.”

“Keeping the ethnicities that we belong to aside, this protest is a call for democracy. We are not supporting any one leader. We are fighting for democracy.” — Holding the placard “No More Violence.”
– Sri Lankan Tamil student Udhayani Navaratnam said

Calling the action “shocking”, the letter to the President urges him to “lift the postponement of Parliament and reconvene it without further delay and ensure that a floor vote takes place on an urgent basis to ascertain which leader currently commands a majority in Parliament.”

“This is a long series of events which is happening across the world where democratically elected leaders are being removed unconstitutionally. This is a coup de tat. In the parliament it should be decided who should rule the country. It is unconstitutional and against the law. We as students of South Asia University stand with our Sri Lankan friends and call for peaceful and democratic resolution to the situation that is prevailing in Sri Lanka.”
– Umesh Joshi, an India student said

The letter asks Sirisena to respect the mandate of 2015 elections which was bestowed upon him by the people and take the right decision.

“Such an action will ensure that stability will return to Sri Lanka along with the confidence of the international community, which is at the moment clearly lost.”
– Mandate of 2015 elections

Afghan student Rustom Seerat compared the developments of Lanka with his own country.

“We have seen bloodless and bloody coups in Afghanistan. All we urge is that countries should shun violence and autocracy. Sri Lanka should choose the path of democracy.”
– Rustom Seerat

Expressing utter disappointment, Anushka Kahandagama said, “We have a Parliament elected through the votes of the people. They are acting like citizens don’t exist. We elected the parliament so let the parliament decide who is the Prime Minister.”

There has been an international call for the government of Sri Lanka to convene the Parliament so that there can be a resolution to the political crisis. But, India on her part has been rather quite about the entire development.