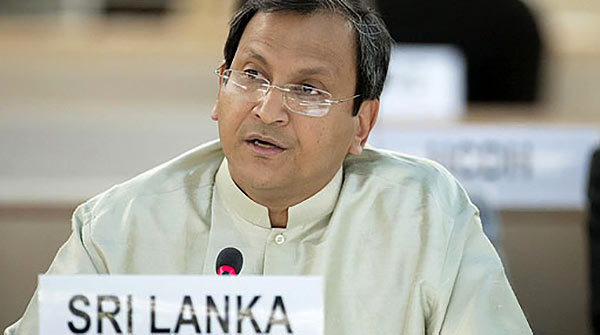 Foreign Secretary Ravinatha Aryasinha called on Sri Lankans overseas to carefully calibrate the effect repatriation at this time could have on their jobs and education, before making decisions to seek to return to Sri Lanka, availing of the limited flights operated by the Government for those facing compelling circumstances.

He made this observation during a televised programme on Saturday (16), where he noted that over 38,000 Sri Lankans are seeking to be repatriated, of that nearly 28,000 migrant workers, the Ministry of Foreign Affairs said in a statement.

The comments made by the Foreign Secretary are below:

Priority right now of the Government following the Cabinet Paper presented by my Minister Dinesh Gunawardena two weeks ago, is to bring back the migrant worker category which needs to come, but more so in some cases have to come. Because they have gone out of status and are illegal, they also as a result of being illegal do not have access to the health facilities and anything else in those countries. There are many who have been thrown out of jobs. They are pretty much destitute. Thereafter we can consider those who want to come, but who have jobs and who simply want to come on holiday to avoid any Corona vulnerability.

Our plea to these employees, as we did to students some time ago, is to ask them to carefully calibrate the possible loss of jobs or loss of educational opportunity or major delays which can occur from their coming. Because in students, we particularly find that in some places, one set of parents want children to come, another set of parents want children to stay and finish their exams. So, while I know these are personal choices alright, I think there must be some rationality in doing this. Because from the Foreign Ministry perspectives, we are working very hard to get them back today, but I know that one month, two months from now, we will once again be asked to try to reconcile their status as students when there are difficulties for them to get back or lose out on semester. It is the same with those who lose their employment.

So as much as the Foreign Ministry and the Government is trying to bring back people, that these people who are wanting to return, make a very careful assessment of their essential needs, as against just wanting to come for the short term. This may not be the best time to use this limited window and have to go into quarantine for 21 days when they come here as well.

We are going to try as much as possible to ensure that those who stay back are assisted to the extent possible, particularly the most vulnerable through the various networks of our 67 Missions, 16 where SLBFE is also present, to try and provide dry rations and where necessary medicines so that the problems they face are managed out there where they are.

As for those on short term visits, we have to bring them back. They have nowhere to go. We are conscious of that. The difficulty to some extent is the fact that they are spread all over and Sri Lankan Airlines, even cargo flights which now are flying, are not flying out to many of these capitals. So, while we are integrating them in flights already coming, how we bring them all back is a matter which is at the moment being discussed at the highest levels.