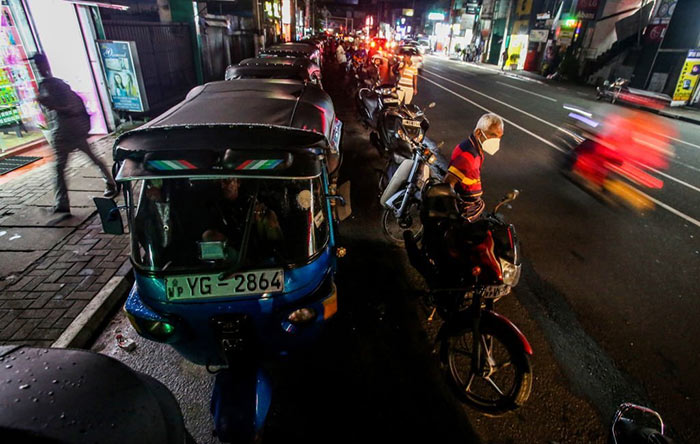 Drivers are waiting in long queues at a filling station in Colombo, Sri Lanka on June 17, 2022. (Photo by Pradeep Dambarage / NurPhoto via Getty Images)

Sri Lanka’s economic activity is coming to a near standstill as the island nation, facing its worst financial crisis, runs out of fuel for transport with little sign of fresh supplies arriving.

The government declared Friday a holiday for public offices and schools to curtail vehicular movement, leaving many roads in and around the capital Colombo deserted. Thousands of vehicles were lined up in queues stretching for kilometers as drivers waited for filling stations to be replenished with fuel supplies.

Minister of Power and Energy Kanchana Wijesekera said on Thursday that the state-run Ceylon Petroleum Corp hadn’t received tenders for fresh stocks of fuel because suppliers were deterred by outstanding payments.

The Daily News newspaper on Saturday cited an official circular as telling civil servants to work from home for two weeks.

The South Asian nation has reached out to several companies and countries, including Russia, for supplies and was hoping for the approval from India for a fresh $500 million credit line for fuel imports, Wijesekera said.

Sri Lanka’s economic meltdown, the most dire in its independent history, has seen protests erupt across the island for the past few months seeking the ouster of President Gotabaya Rajapaksa and his family members from government. The clan has been blamed for taking decisions that have led to severe shortages of everything from fuel to medicine, inflation at almost 40%, daily power outages of as long as 13 hours and a historic debt default.

The nation will need about $6 billion in aid from the International Monetary Fund and countries including India and China, to tide over the next six months, according to Prime Minister Ranil Wickremesinghe. Local authorities are looking to fast-track bailout talks with the IMF in order to get other fresh sources of funding.

Sri Lanka’s economy likely contracted in the first quarter, slammed by the public protests, political instability, high commodity prices and supply-chain snarls. According to Bloomberg Economics, a recession this year will be unavoidable.