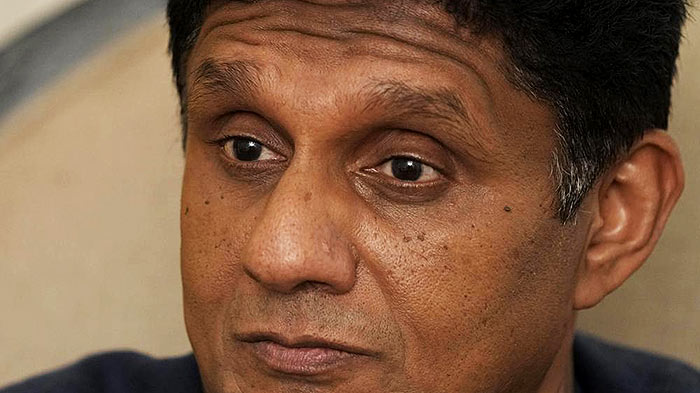 Sri Lanka’s opposition leader, who is seeking the presidency next week, vowed Friday to “listen to the people” who are struggling through the island nation’s worst economic crisis and to hold accountable the president who fled under pressure from protesters.

In an interview with The Associated Press from his office in the capital, Sajith Premadasa said that if he wins the election in Parliament, he would ensure that “an elective dictatorship never, ever occurs” in Sri Lanka.

“That’s what we should do. That is our function – catching those who looted Sri Lanka. That should be done through proper constitutional, legal, democratic procedures,” Premadasa said.

The former president, Gotabaya Rajapaksa, slipped away aboard a military plane Wednesday before arriving in Singapore the following day. His resignation was officially announced Friday.

His departure followed months of protests that turned a dramatic corner when demonstrators seized government buildings before retreating days later. Protesters accuse Rajapaksa and his powerful political family of syphoning money from government coffers and of hastening the country’s collapse by mismanaging the economy.

The family has denied the corruption allegations, but Rajapaksa acknowledged that some of his policies contributed to Sri Lanka’s meltdown.

For now, the presidential role has been filled by Prime Minister Ranil Wickremesinghe, who was sworn in as the acting leader. Protesters have pressed for Wickremesinghe to leave as well, and for a unity government to address the economic calamity that has triggered widespread shortages of food, fuel and other necessities.

He said his Samagi Jana Balawegaya party and their alliance unanimously supported him as the presidential nominee for the election on July 20, when all 225 members of the Parliament will vote to elect a new president.

But he acknowledged that he faces a tough task in securing the support needed to succeed, since the majority in Parliament is still held by Rajapaksa’s governing party.

In 2019, Rajapaksa collected nearly 6.9 million votes to defeat Premadasa, his main rival at the time, who got close to 5.6 million votes. The victory was followed by parliamentary elections the next year in which Rajapaksa’s party established a clear dominance that opposition parties have struggled to break.

Premadasa said the current Parliament is at odds with how Sri Lankans feel now.

“The major problem that we face is the government that brought this country to a near abyss … So it’s a very difficult situation of trying to come to a temporary political marriage or an arrangement with those whose actions resulted … in bringing an economic, social and political disaster for the people of Sri Lanka,” he said.

Whoever leads the country next will be faced with a daunting mandate. Premadasa said Sri Lanka is “essentially bankrupt” and the government has been negotiating for months with the International Monetary Fund on a bailout package, while muddling through with help from neighbours such as India.

Rolling fuel shortages sent the country looking to Russia for crude oil recently as it scrambled to meet demand at gas stations where lines of vehicles stretched for miles.

Many critics have blamed policy blunders by Rajapaksa and his family, like deep tax cuts in 2019 that slashed state revenue and heavy borrowing from creditors such as China on splashy infrastructure projects that failed to generate revenue.

Premadasa described those decisions as “imprudent, impractical” and “foolish” and said they “resulted in millions and millions of people suffering.”

When asked how he planned to resuscitate the economy, he said the country must go through debt restructuring. Sri Lanka, he added, has “no choice” but to work with international financial institutions and to engage with as many countries as possible.

“We have to work with everyone,” he added.

His economic plan includes reviving tourism, boosting exports and ushering in direct foreign investment. The political turmoil has deepened concerns that solutions to the economic woes, like IMF assistance, will be delayed.

Premadasa said it’s critical for leaders not to interpret their mandate as “some sort of an assurance of permanent domination.”

“The mandate is a temporary mandate. Never try to think that you are the freehold owners of the country. Think of yourself as being a guardian, being a trustee of the wishes of the people.”

He said he would “listen to the people” and serve as “a sounding board” for their “reflections, impressions, ideas.”

Most important, he said, “one has to be humble and humanistic. All these characteristics that I expressed, they were lacking in this present administration.”

While millions voted this government in, millions of others voted against it, Premadasa said, adding that he felt sorry for everyone in the country.

“I feel helpless … because the people did not empower us, at least with more numbers in the opposition, so we could have put up a bigger fight and at least tried to end this misery, which is on the doorstep of every household,” he said.

But he is still “quietly confident that as this process evolves itself, sanity will prevail. And through a fresh mandate, we will be able to fulfil the aspirations of the people of our country.”