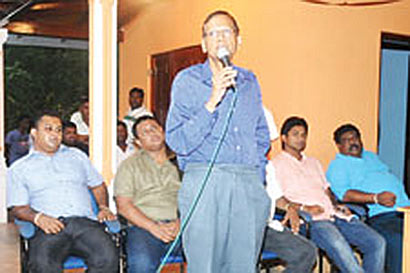 Despite the well planned and persistent attempts, in some quarters, to re-canvass the decision to hold the Commonwealth Heads of Government Meeting (CHOGM) in Sri Lanka in November this year, the government has been able to defeat those efforts and it is a matter for satisfaction that justice has been done, Minister of External Affairs Professor G. L. Peiris said in Hambantota on Saturday.

He was addressing the Bala Mandalas in Katuwana and Weeraketiya over the weekend.

What Commonwealth values require is support for a country which, by virtue of a coherent strategy and the strong commitment of its leadership and the public, has overcome terrorism, and not encouragement – even indirectly – of any course of action which strengthens the forces of destabilization, he added.

Minister Peiris said that during his one-day visit to the United Kingdom, last week, he had comprehensively briefed the Secretary – General of the Commonwealth as well as representatives of countries having membership of the Commonwealth Ministerial Action Group (CMAG) about Sri Lanka’s initiatives regarding development and reconciliation, and the results already achieved on the ground. He expressed satisfaction that these countries have shown understanding of the true situation and have not been misled by propaganda on the part of vested interests.

“This is all the more satisfying because of the large resources at the command of the forces opposed to Sri Lanka, whose objective remains constant, notwithstanding the military defeat of terrorism,” he observed. It is also important to remember, the Minister said, that the resources available to these elements have increased significantly, now that these funds are no longer utilized for the purchase of weapons, bringing about a situation where large resources can be expended to purchase influence and intensify pressure on Sri Lanka.

Minister Peiris referred to the carefully orchestrated speculation in some quarters that the Commonwealth Ministerial Action Group, at their meeting in London on Friday, would take up Sri Lanka as an item on their agenda and pass strictures on Sri Lanka. Sri Lanka, in fact, was not on the agenda, and nothing of the kind had happened. There is not the slightest doubt that the Commonwealth Summit, as decided by Heads of Government, will take place in Sri Lanka in November, and systematic preparations are well under way, he remarked.

The focus under President Mahinda Rajapaksa’s leadership on Sri Lanka’s diplomatic relations with Africa and the Caribbean has paid rich dividends, in the form of enhanced understanding of Sri Lankan issues, and this contributed significantly to the positive outcome of the recent Commonwealth Meeting in London, he observed. Prof. Peiris said that the central themes of the Summit will emphasize youth entrepreneurship, the development of skills and the spread of technology to the rural areas. It is entirely fitting in this context, he said, that the Youth Forum – a major event on the sidelines of the Summit – should be held in Hambantota.

The Business Forum, to which some countries outside the Commonwealth are also being invited, will add a powerful impetus to trade and investment, and this sharp focus on Sri Lanka will certainly benefit the youth of the country, Prof. Peiris said.

The Minister stressed the need for the public at large to rally round the government to hold anti-national elements at bay and to consolidate the fruits of a hard won victory.