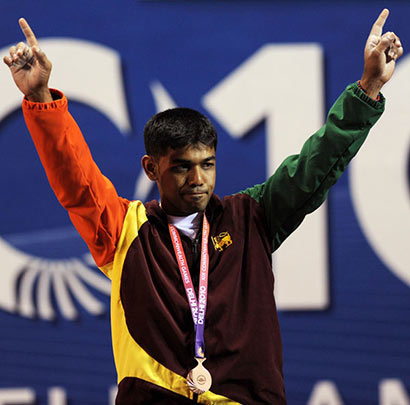 Sri Lanka’s Sudesh Peiris has won the Silver Medal for Men’s Weight Lifting in the 62kg category at the Commonwealth Games in Glasgow, giving Sri Lanka its first medal at the games this year.

Anton Sudesh Peiris Kurukulasooriyage, from Sadalankawa, is the Captain of the Sri Lankan contingent to the 20th Commonwealth Games currently being held in Glasgow, Scotland.

He had won the bronze medal from the men’s 62 kg weightlifting clean and jerk event during the 2010 Commonwealth Games at the Jawaharlal Nehru sports complex in New Delhi.

Sudesh had lifted a total weight of 272kg breaking the then Sri Lankan record for the category.