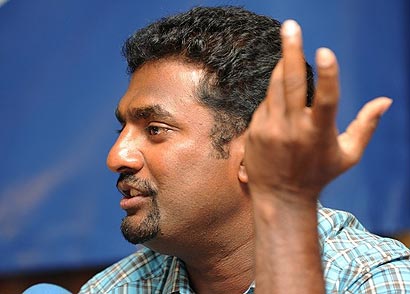 COLOMBO, Sri Lanka (AP)—As his cricketing career winds down, Sri Lanka’s superstar Muttiah Muralitharan, the man who can spin a cricket ball like magic, is turning his sights on dragging war-shattered youngsters out of poverty and nurturing the country’s next generation of athletes.

Who else but Murali, as he’s known to the whole country, could persuade the Sri Lankan president to donate a 50-acre parcel of land in the northern region that has been devastated by 20 years of civil war.

But Murali hasn’t given up on cricket yet. He’s hoping for two more games in the next few days to bring the World Cup home.
AdChoices

“We have a good team with good ability but we’re also going to need some luck,” Murali said after a day spent touring the project.

Murali got up early for the helicopter trip from Colombo a few hours after helping Sri Lanka beat England and qualify for the World Cup semifinal.

With his 39th birthday coming up next month, Muralitharan is counting down the days to his retirement from all cricket, which will happen at the end of Sri Lanka’s World Cup campaign.

Struggling for fitness, he is determined to play in Tuesday’s semifinal against New Zealand in Colombo and then possibly the final in Mumbai.

Muralitharan took 800 test wickets and carried on a rivalry with Australian spinner Shane Warne for several years over who was the better bowler, before the Sri Lankan retired from the five-day format last year.

Muralitharan outlasted Warne, but both men now cooperate on development projects. Now only a maximum of two ODIs remain to cap his career.

But the disasters that have struck Sri Lanka—civil war and then a tsunami that killed more than 30,000 people in 2004—have thrust Murali to the forefront of global efforts to raise money to lift Sri Lankans out of poverty— and cricket is often the best currency to use.

“Cricket is the most important game in this part of the world,” he told a news conference Sunday held to announce a $5 million project to build a new school as well as a “Learning and Empowerment Institute,” which will include sport.

On Sunday, Murali was accompanied by his friend and former cricketing foe Sir Ian Botham, who has joined the project, for a tour over the land near the northern town of Mankulam, ravaged by the war that ended in 2009.

The land dedicated to the new center first has to be cleared of explosives, Murali said. Botham said it was “mind-blowing” to see the extent of devastation left behind in northern Sri Lanka.

High-profile cricketers like Botham, ex-England captain Michael Vaughan and Australians Steve Waugh and Warne have been major contributors to the project, which has seen one center already built in the south of the country that was ruined by the tsunami.

Sri Lanka captain Kumar Sangakkara, also a supporter of the charity, said Muralitharan had been an advocate of ethnic harmony in a country often divided between Tamils and the majority ethnic Sinhalese people. Murali is a Tamil.

“Cricket is a social panacea in Sri Lanka and Murali is an icon, not just as a cricketer but as an advocate of racial harmony,” Sangakkara said.

The center already built in the south of Sri Lanka had become “a vibrant hub,” Sangakkara said.

Amnesty International says between 7,000 and 40,000 are estimated to have died in the final five months of the conflict.