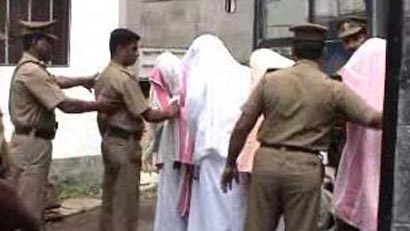 Five men suspected of murdering a British tourist in Sri Lanka early on Christmas Day have been remanded in custody until 20 January.

The men are suspects in the death of Khuram Shaikh, 32, and the serious assault of his girlfriend in Tangalle, 100 miles (161km) south of Colombo.

Mr Shaikh, from Greater Manchester, was attacked by a sharp weapon and shot, police have said.

The physiotherapist’s body was repatriated to the UK two days ago.

He was on holiday at a resort in Sri Lanka from his job with the International Red Cross. He had been working in Gaza.

Superintendent of Police Ajith Rohana told BBC Sinhala service that 16 witnesses were present at the identification parade held on Thursday in Tangalle, and many of the witnesses identified all five suspects.

The chairman of the local council in Tangalle, Sampath Chandrapushpa Vidanapathirana, 24, was among the suspects identified.

Mr Shaikh’s Russian partner, Victoria Aleksandrovna, was among the witnesses but she could not identify any of the suspects, Mr Rohana said.

Ms Aleksandrovna was allegedly raped after the attack on the couple, according to the Asian Human Rights Commission (AHRC) and media reports, but police say they are yet to receive any medical reports about her condition.

A spokesman for the International Committee of Red Cross in Geneva, Christian Cardon, told the BBC that the ICRC was following up on the incident with Sri Lankan authorities.