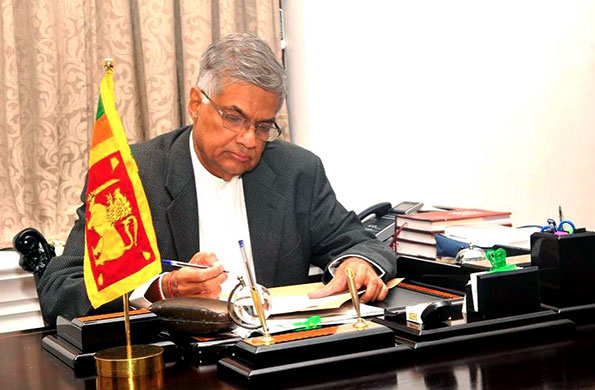 A mechanism to provide relief for farming families affected by extreme weather will be developed within two weeks, Prime Minister Ranil Wickremesinghe said.

The Prime Minister was making a special statement in Parliament yesterday on the economic impact of the inclement weather and the steps initiated by the Government to control the cost of living.

The Prime Minister said a Committee comprising of the Secretaries of Finance, Disaster Management, Home Affairs and Agriculture Ministries has been appointed to report to the Cabinet a mechanism to identify the affected farming families and provide relief to them.

He said a Cabinet Subcommittee comprising Ministers Patali Champika Ranawaka, Susil Premajayantha, Anura Priyadarshana Yapa and Rauf Hakeem has been appointed to study the impact of climate change on agriculture and make recommendations.

Elaborating on the short term measures decided by the Cabinet this week to control the cost of living the PM said rice and coconut kernel would be imported as necessary to control their prices in the local market.

“We have already given approval to import 200,000 MT of rice. Eventhough we got considerable rainfall in November, the monsoon rains were less than expected. We will have to take measures to control the rice prices until the next Maha season harvest reach the market by April next year,” he said.

The Prime Minister said a shortage of 40 million coconuts per month has been predicted from January to May next year. He pointed out the economic growth predicted at 5.5 percent of the GDP for 2017 dropped to 4.5 percent due to drought and floods.

The Premier said the agricultural sector showed a -1.2 percent negative growth. “I am not giving you excuses. We are ready to take the responsibility. But, the reality must be explained.

“The Cabinet when it met last Tuesday and Thursday extensively discussed the measures to bring down the cost of living,” he added.

The PM said vegetables and other food items would also be imported if necessary, while taking extra care not to affect the local farmers.

The Prime Minister said a meeting with all relevant stakeholders and representatives of the World Bank and Asian Development Bank has been scheduled next week to discuss the impact of climate change on economy and decide the future course of action.

“I believe we need to prepare our economy to be resilient to climate changes. We need to prepare a new mechanism for that purpose. As the agriculture sector has shown a negative growth, we need to accelerate the growth in other sectors of our economy if we are to attain the stipulated economic growth targets,” said the PM.

MP Dinesh Gunawardena brought the attention of the PM to take steps to reduce the post-harvest damages, highlighting that 37-40 percent harvest is wasted due to lack of proper storage facilities.

The PM agreeing to the comment said it would be looked in. The PM proposed to have a debate following the LG elections on the medium and long term measures to confront economic challenges faced by climate change.

Regretting the sudden hike in cost of living the PM however assured it would be controlled by January-February next year.