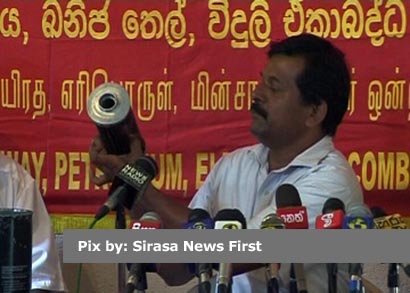 A meeting was held on Thursday to brief the media about the damage caused to various sectors, following the use of sub- standard diesel.

The following are some of the views expressed during the briefing.

“This is a filter that has been affected. The filter is filled with air; this has affected at least 36 train engines. There are three such filters in each engine. This raises the total number of affected filters to 102. One filter costs Rs. 30,000. The CPC must pay for the damage caused to the train engines.”

“This fuel was pumped in to 18 cranes on the 23rd of last month (July). After 1 a.m, these cranes stopped working. New filters had to be fitted to these cranes as well. A filter costs around Rs. 10,000 and each crane has two such filters.”

Sepala Liyanage- Secretary of the All-island Transport Services
“Six buses plying on the Maharagama-Galle route on the expressway suffered breakdowns. It has been reported that the filters of nearly 50 buses need to be replaced. One filter costs around Rs. 5500 rupees. The public will definitely have to bear this cost.” added  union Sepala Liyanage

Gemunu Wijeratne- Chairman of the All-island Private Bus Owners Union
“The government has no regard for the damage caused to property. The government will replace its trains, buses and other vehicles. But who will pay for our buses? A litre of diesel is Rs. 115 rupees while super diesel is Rs. 145. We urge officials to temporarily provide us with super diesel at the price of normal diesel, till this issue is resolved.

Meanwhile, according to the Jathika Sevaka Sangamaya Petroleum branch, the stock of sub-standard fuel had been purchased from a company that had previously been blacklisted.

Ananda Palitha- Secretary of the Jathika Sevaka Sangamaya, Petroleum Branch
“We need to say that that an independent investigation group is linked to this fraud. This company was removed from our registered list on an earlier occasion for violating the terms. This company paid millions as compensation for the disrepute caused to the CPC. Last year under mysterious, circumstances they were allowed to supply fuel and also bid for tenders.”

When Newsfirst made inquiries from Minister of Petroleum Industries Susil Premajayantha, he confirmed that the company had been previously blacklisted.

However the Minister pointed out that this was the only company that came forward to supply fuel with a low sulphur content to the Kerawalapitiya power plant.

Thereby, the Former Chairman of the CPC had imposed a fine and re-enlisted this company to supply fuel.

Furthermore, during a Sri Lanka Freedom Party Media briefing that was held on Thursday, it was confirmed that a company which had been blacklisted earlier, had in fact supplied this consignment of fuel.

“According to the former chairman, the company which was once blacklisted, had later been removed from it”

”Is it legal to offer a tender to a company once it has been blacklisted?

“I am not aware of the exact procedure to remove a company from such a list. The minister informed me that if any official is found guilty, he will be punished.”

Sepala Liyanage- Secretary All-island Transport Services Union
“The Mahinda Chinthana policy framework was introduced in 2005. It is stated in it that the international convention against corruption will be implemented to the letter. The time has come to show the people that the hands of the president as well as yours are clean.

Sajith Premadasa
”A company that was blacklisted was given the opportunity to supply fuel once again without even paying a fine. What happened as a result? Our public transport system came to a grinding halt.”

1 Response to Talk of the Town: Sub-standard diesel sparks controversy