Ananthi Sasitharan is a TNA elected member of the Northern Provincial Council. She is also the wife of LTTE leader Elilan. Elilan was responsible for forcibly conscripting large numbers of Tamil children during the final stages of the war. Ananthi however, filed a court case and went global, crying over her ‘missing husband’ and projecting herself as a voice of ‘missing Tamil children’. On 5th June 2014 was a day when the ‘hunters became hounded’ and Ananthi had to face a barrage of protestors demanding from her the whereabouts of their missing children. The same protestors gathered in July demanding from Ananthi where their children were. The same protestors arrived on 25th August 2014 making the same demands. This time though Ananthi was missing in action what was also missing was Sri Lanka’s media and so far not one NGO or human rights organization have cared to air across mainstream media the cries of these people asking from TNA’s Ananthi Sasitharan what she and her husband did with their children.

Yet, Ananthi Sasitharan is enjoying stardom. She was given VIP treatment in Geneva in March 2014, a much hyped publicity was given when she spoke about her ‘missing husband’ and ‘missing children’ during the time allocated for NGOs representing causes of other countries. She was pictured gleaming with the US ambassador and Stephen Rapp. Since her election she has been on sponsored visits to USA, Germany, Denmark and Norway and visits to South Africa, France, Belgium, Singapore, Australia are on the pipeline. Her husband Elilan, a senior LTTE leader, is the same Elilan that was responsible for taking scores of children and forcibly conscripting them to the LTTE during the final stages of the war. During the cease fire agreement of 2002 as LTTE’s political commissar for Vavuniya and Trincomalee districts, Elilan, was engaged in taxing Tamils and forcible recruitment during a supposed ceasefire. Elilan incidentally was also responsible for blocking the water supply of the Mavil Aru river which is a crime against humanity depriving water to people. Elilan husband of Ananthi’s importance in the LTTE hierarchy is such that upon Tamiselvan’s death in 2007, Elilan was placed in charge of conscription to the LTTE. The nature of conscription in Mullaitivu by Ananthi’s husband has been carefully omitted from entering the mainstream media by the LTTE fronts. Their stories would put to shame the concocted lies taking centrestage. This is why we continue to question why not a single high profile journalist, not a single NGO/INGO, not a single human rights organization, foreign parliamentarian not even the noisy parker foreign envoys in Sri Lanka have cared to ask these 350 families what they accusing Elilan and Ananthi of. Instead, Ananthi is playing the role of victim and all these parties are propping her up as a victim.

Ananthi’s modus operandi was to portray a husband not as an LTTE leader but a civilian gone missing after surrendering to the armed forces. She boldly filed a case against her ‘missing husband’ and on behalf of ‘missing Tamil children’. She has been at the receiving end of rude shocks every time she appeared at the courts.

Tamils parents are now coming out to demand from Ananthi Sasitharan where their missing children are. It is a matter of time that Tamils that suffered under LTTE will also feel encouraged to come out and openly demand from other members of the TNA accountability.

The husband of Ananthi, the man the world presumes is Ananthi’s ‘missing’ husband is none other than Sinnathurai Sasitharan or Major Ezhilan/Elilan. Ananthi carrying vigils for the missing, shedding crocodile tears may like to recall how her husband used swords, knives and poles to hack and assault Tamil civilians to prevent them boarding the ICRC vessel to transport the injured for medical treatment. The ‘injured’ that were allowed were all injured LTTE cadres, LTTE supporters and LTTE family members. Tamils may now be courageous enough to come forward and relate how Ananthi’s husband brandished a sword threatening the Tamil civilians. How many of these Tamil civilians did the LTTE actually kill by firing at them when Elilan issued orders to fire? These incidents are directly related to the violations by LTTE during the span the OHCHR will be investigating.

Why doesn’t the entities claiming to be concerned about the human rights of civilians ask Ananthi what her husband did at the ‘Our Lady of the Rosary’ church in Valainjarmadam where over 900 men and women sought shelter? Why have the details of how Elilan and fellow LTTE cadres dragged out youth and children and fired at those who resisted killing them not gone into the public domain? Why has the so-called free media kept mum on publicizing how Ananthi’s husband took 500 of these Tamils at gun point and forced into buses to be used as cannon fodder. Where are the rest of the 300 or so Tamil civilians who remained at the Church and why have their eye witness accounts against Ananthi’s husband not been exposed?

Ananthi today going to courts claiming that her innocent husband is ‘missing’ seems to have forgotten how her husband shot in cold blood a woman who wanted to cross over to the Government controlled area so that she could give her child some milk. Ananthi’s husband had taken his gun and shot the women into her forehead killing her instantly – what happened to that baby is anyone’s question. The baby’s mother was killed by Ananthi’s husband.

If the world starts looking from the lens of these ordinary civilians who suffered at the hands of the LTTE throughout the conflict and not from the Tamil beneficiaries and Tamil/Non-Tamil and Foreign supporters of LTTE the story of LTTE crimes would have been far different. Obviously, the victims of the LTTE be they ordinary Tamils, Sinhalese or Muslims do not have the funds or propaganda machinery in their favor nor do they have people voluntarily willing to fight for their cause as against the well funded propaganda machinery that is geared to concoct lies, distortions and ever ready to produce people who are ‘eye witnesses’ with stories they cannot prove with evidence.

25th August 2014, over 350 protestors came out again to make their voices heard. Ananthi Sasitharan did not wish to face the same embarrassing situation that faced her in Jun and July 2014 and thus she was conspicuously missing.

The protestors will return and will continue to haunt her and the TNA.

It is no better a time for the rest of the Tamils who suffered under LTTE to start coming out and being counted too. 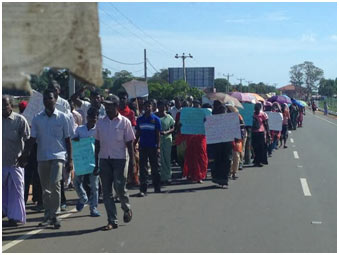 The Tamil Families with hand written placards to ask Ananthi where their children are. 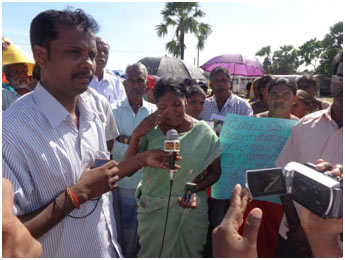 Has a single NGO / foreign journalist / Human Rights Organization asked this lady what happened to her child? Did her story ever go to Navi Pillai? 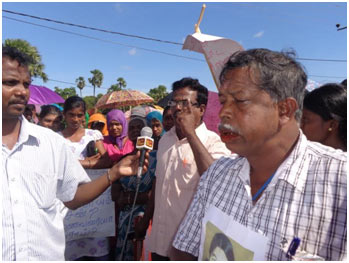 Who will listen to this Tamil civilians’ story asking Ananthi Sasitharan, the TNA elected NPC where she and her husband took his child?