Tamil Vote Could Be Key in Sri Lanka 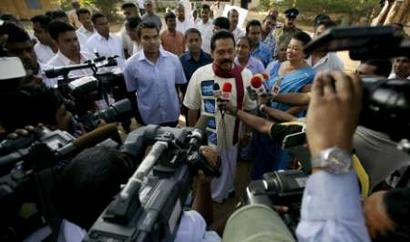 COLOMBO, Sri Lanka —As voters streamed to the polls on Tuesday in Sri Lanka’s first election since the defeat of the Tamil Tiger insurgency, the Tamil vote has emerged as the bloc that could decide the winner.

The incumbent president, Mahinda Rajapaksa, had hoped for an easy victory after delivering last May on his promise to end the war against the Liberation Tigers of Tamil Eelam. But the country’s fragmented opposition has rallied behind Sarath Fonseka, the army general — now retired — who led the successful assault on the rebels.

The result has been one of the hardest-fought election campaigns in Sri Lankan history.

Both men are suspected by local and international human rights organizations of having committed war crimes against Tamil civilians, especially in the final months of the fighting, but the Sri Lankan government has so far resisted calls for an independent investigation.

Despite these allegations, the main Tamil parties, including the Tamil National Alliance, which was closely linked to the Tigers, are backing Mr. Fonseka.

Sophia Vyasah Kalyasundaram, who voted Tuesday morning in the Tamil neighborhood of Wellawatte in the Sri Lankan capital, said she cast her ballot for Mr. Fonseka with some trepidation. But she said that kicking out the incumbent was the most important thing.

“Tamils are looking forward to a change,” Ms. Kalyasundaram said.

Mano Ganesan, who leads a small Tamil party based in the capital, said that Tamils stood a better chance of having influence with Mr. Fonseka as president.

“Tamil people need regime change in this country, and Fonseka is the candidate that can bring down Mahinda Rajapaksa and bring down the regime,” he said.

Tamils make up less than 20 percent of the country’s population, but they represent a significant bloc now that the votes of the majority Sinhalese population are likely to be split between the incumbent president and his former general. Some Sinhalese voters have abandoned the president over what they see as rising corruption and the increasing consolidation of power in the hands of Mr. Rajapaksa’s family.

Most Tamil voters sat out the last election, in 2005, when the Tamil Tigers and Tamil political parties called for a boycott. Mr. Rajapaksa won then, by a narrow margin, with his pledge to finish the war by finishing off the Tigers. The 26-year war ended last May with a final push by the Sri Lankan military against the cornered remnants of the Tigers’ once-powerful insurgent militia.

“Four years of Rajapaksa rule has heaped a lot of hardship on people generally, but particularly the Muslim community has felt there were very systematically planned discriminatory policies that were being felt in every sphere of life,” said Rauf Hakeem, leader of the Sri Lanka Muslim Congress party. “With Fonseka we could redeem our lost dignity and feel like full citizens of this country.”

A jumble of opposition parties from the Sinhalese majority is also backing Mr. Fonseka, including the pro-business, center-right United National Party; the Marxist, ultra-nationalist party widely known as the J.V.P., the Sinhalese acronym for the People’s Liberation Front; and a number of smaller parties.

Mr. Rajapaksa’s campaign aides remained confident that he would win another term, but conceded that it had been a tough fight.

“Elections in Sri Lanka are always competitive, and this one is no different,” said Lucien Rajakarunanayake, a spokesman for the president. “But the voters know he deserves another term to finish what he started.”

His supporters also argue that Mr. Rajapaksa has more experience and a record of delivering on his promises.

“He gave us our freedom,” said R. D. Weerasiri, who drives a motorized rickshaw in the capital. “He carried out development in spite of the war. I am confident he will lift up the whole country.”

Turnout appeared to be heavy, according to election officials on Tuesday morning. There were reports of sporadic violence, including a set of unexplained explosions in the northern city of Jaffna, a Tamil stronghold.

Results of the election are expected on Wednesday morning, government officials said.

Home » Tamil Vote Could Be Key in Sri Lanka