Tamils are not oppressed in Sri Lanka and never were 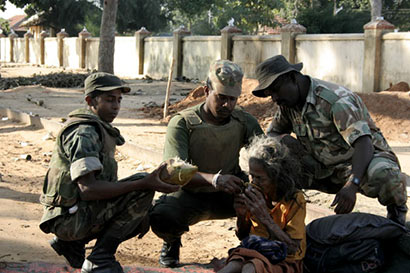 Efforts are being made to project a notion that Tamils are oppressed. The mischief behind this endeavor has nothing to do with Tamils but simply as a slogan to create precedents. The organization outsourced to create precedents legally is the UN. Conflicts have become easy to engineer and all it takes is a single skirmish or isolated event for paid media to go to town. There are many ways to silence people and to make people talk as well. Conflicts are begun never to end which is why international charities, humanitarian organizations, peace builders, are all in a thriving profession. The notion that Sri Lanka has an ethnic problem has been an effective mechanism for a handful of people. This notion has bled the country because the problem was never identified as a terrorist problem and dealt with as a terrorist problem. Caught into this milieu are Tamils in whose hands rests the extent to which foreign interference is allowed.

Let us be clear that Sri Lanka faced a Terrorist problem and not an Ethnic problem. Therefore, it is imperative that solutions being proposed do not confuse the two.

The confusion has prevailed because Tamils have not voiced their opinion against LTTE terrorists. If they had done so, we would not be faced with such confusions. Tamils have enjoyed using the conflict to settle in foreign climes as refugees. Anyone claiming right of stay in a country needs to protect the country from foreign incursions. It is a good time for Tamils to wake up to the manner states are being re-divided according to a template that suits imperialists motivated to ride on conflicts and create armed groups so that the imperialists can take over the resources for themselves. Kosovo is an example that Tamils now need to look carefully upon wondering how far the bogus ‘self-determination’ bid will lead Sri Lanka.

No one can claim 1/3 of Sri Lanka’s land & 2/3 of Sri Lanka’s sea & call it Tamil Eelaam whilst also gaining the right to live in other parts of Sri Lanka. Which country will allow this when historically Sinhalese have been living far longer than any other ethnic group throughout Sri Lanka?

30 years of terrorism was inflicted mostly upon non-Tamils, it was they who were the targets of LTTE. The only other Tamils to be targeted were those that were moderate and wanted to get along with the rest of the communities and the Vanni Tamils from whom the LTTE plucked its foot soldiers. The hierarchy of the LTTE enjoyed all the comforts and are still enjoying fooling Tamils with a promise they know is not real.

LTTE’s first target was a Tamil. He was a Tamil Mayor. LTTE went on to shoot Tamil police officers on duty in the North. It was this that made Tamils fear to join the police force.

The negative propaganda makes the world believe that Tamils are discriminated. Sri Lanka’s media are not interested to set the story straight.

Let us see how the Constitution has provided for Tamils.

Let us now move on to look at what Tamils enjoy presently in Sri Lanka.

Where there was and perhaps is discrimination

Blacks of UK – Treated no differently to the blacks of America, UK was home to plenty of racial riots and many types of discrimination in employment, housing allocation and social services exists still.

Blacks of South Africa – their homeland was taken over by whites who ruled South Africa plundering the nation of its resources. Apartheid is a dark chapter in the lives of these black people.

Discrimination of Tamils by Tamils in Sri Lanka

In Jaffna members of the same caste only eat together. High caste Tamils don’t marry low caste – those that do are shunned. Unclean Tamils are forbidden from entering Tamil kovils.

At post independence low castes were forbidden from entering schools. S W R D Bandaranaike Prime Minister of Sri Lanka changed this by introducing the Social Disabilities Prevention Act 21 in 1957. The high caste Tamils opposed giving education to their own people. They even wrote to UK against this.

Post-conflict the Government Agent in the North is on record for the number of rapes rising – these were Tamils raping Tamils.

What happened to the peace between Sinhalese & Tamils

We need to go back in time to recall a history where Sinhalese & Tamils lived at peace with each other until that peace was destroyed shrewdly by the Portuguese, the Dutch & the British. Essentially, the dharmic religious connection must prevail between the Buddhists and Hindus. It is a strength that needs to be nurtured. We suffered 443 years of brutality & oppression whilst a handful benefited from education & conversion. Of the 64 years of independence half of it was plagued with terrorism. Much of the trouble in reality prevails not amongst the ordinary citizens but politicians and their henchman who see opportunities by keeping people divided under whatever theme they can devise. The same opportunities are viewed by external players for these become avenues to advance their power blocs, bases and remunerations.

We have to now rewrite our history books. The older generation need to separate the realities from the lies, the younger generation should not be taught to carry the aspirations of the old and must be encouraged to live in peace & harmony in a country that belongs to all wherever they choose to live. Those communities that have made their home Sri Lanka arriving as immigrants and traders must acknowledge the historical truth that Sri Lanka was built by the toil of Sinhala Buddhist blood and it was these people that sacrificed their lives to save the nation from those out to invade it.

We must say no to homelands, no to ethnic based solutions or devolutions and no to external interference. This message needs to be clearly carried to all external stakeholders and the local lascoreens who have greatly contributed to the lies that prevail. To this list we need to also add those in Government and those who had previously served in Government because they have by their self-centered decision making created worse problems whilst keeping unworthy characters who are not serving the nation.

What needs to be clearly said is that Tamils were never discriminated by any constitutional, legislative, judicial provision and that should clearly negate the false propaganda made to the advantage of a handful.

Home » Tamils are not oppressed in Sri Lanka and never were