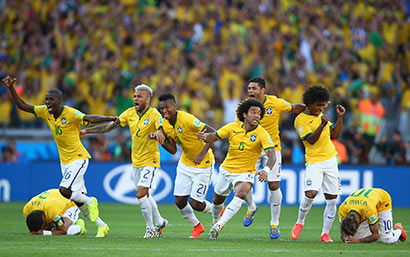 BELO HORIZONTE, Brazil — With the pressure of an anxious nation bearing down on them with each passing minute, the Brazilian players teetered on the brink of a defeat that would have wounded a country’s soul.

Brave Chile was refusing to back down, demonstrating to 57,714 howling fans at Estádio Mineirão and millions more watching at homes, restaurants and bars that the team had the nerve to stand up to the mighty host nation through 120 minutes of the most tense and exhilarating soccer seen so far at the 2014 World Cup.

After 30 minutes, it looked like the most fast-paced, breathtaking game of the tournament. After 90 minutes, the teams were even, at 1-1, after Chile had controlled play through much of the second half, leaving the Brazilian fans nervous and agitated. Through 30 draining minutes of extra time — which included a thunderous Chilean shot that struck the crossbar in the 120th minute, inches from knocking Brazil out — neither team could take a lead.

The game, which had been so nerve-racking and exhausting for players and fans alike, went to penalty kicks, and Chile, not regarded as a top-tier team in decades, had a chance to bounce the hosts from the tournament.

After nine players had taken penalty kicks and Brazil had a one-goal advantage, Gonzalo Jara, the Chilean defender who deflected Brazil’s 18th-minute goal into the net, walked to the spot needing to score to keep his team alive. He struck boldly, as Chile had done all day, but the ball hit the post to the left of goalkeeper Júlio César, bounced back across the mouth of the goal and rolled away to safety.

As Jara put his head in his hands in anguish, the Brazilian fans erupted with deafening shrieks, an equal mix of relief and delight. Across the city and the country, fireworks, car horns and shouts echoed out.

Brazil had advanced, 3-2 on penalty kicks, avoiding the horror of early elimination — but only by the slimmest of margins in a game that would have made for a memorable final.

“We needed this,” said Júlio César, who was named the man of the match. “I just hope that the next games don’t go to penalty kicks again because our family members and relatives might have a heart attack.”

Júlio César took much of the blame for Brazil’s loss to the Netherlands in the quarterfinals of the 2010 World Cup, and many said he should no longer be Brazil’s starting goalkeeper. But Coach Luiz Felipe Scolari had faith in him, as did the Brazilian players.

As Júlio César prepared for the penalty kicks, he shed some tears. That might have been a worrying sight for the fans of Brazil, but he made saves on the first two shots: the first from Mauricio Pinilla, the man who hit the crossbar in the 120th minute, and the second from Alexis Sánchez, the exhausted forward who scored Chile’s equalizing goal in the 32nd.

“I was crying because, individually, several teammates came supporting me and saying beautiful and wonderful things, and I couldn’t hold it,” Júlio César said. “But I knew I needed to focus on being decisive for my team and my country.”

He was, and so Brazil moved on to the quarterfinals to play Colombia, which defeated Uruguay, 2-0, in a Round of 16 game in Rio de Janeiro. Scolari spoke to his players after the game and warned them that they needed to do better in their next game, to play with more confidence and aggression.

Brazil, he fears, is taking the role of host too literally.

“We are being very cordial and nice and polite to foreign teams,” he said. “It’s about time for us to change, to show we won’t be hit by stones from coaches and players and foreign journalists. It’s about time we defend ourselves differently.”

Clearly, the Chileans had put a scare in him. But after the narrow defeat, it was time for them to go home.

Chile had emerged as one of the most dynamic teams in this tournament, representative of the ascendancy of many of the Spanish-speaking countries from the Western Hemisphere, including Colombia and Costa Rica.

It did not have an easy road through the group stage, either, beating Spain, the defending champion, and playing the Netherlands close in a loss. And on Saturday, the Chileans were able to put a scare into Brazil in front of a sea of yellow jerseys. Chile’s coach, Jorge Sampaoli, said Friday that the key to the game would be courage, and his players did not let him down.

“Even if we didn’t win today, I think that Chile can feel very proud and very thankful for what this national team has given,” he said. “They have defended our colors with pride and with bravery.”

They certainly helped make the first knockout game of the tournament one to remember.

Playing in a packed stadium on a crisp, sunny day, the teams went back and forth, with the Chileans answering every probe from the Brazilians and forcing much of the action. Sánchez was a consistent threat, holding the ball against a barrage of kicks and bumps, and Chilean defenders did well to shut down Neymar.

The teams traded goals in the first half, with Brazil scoring first on a goal credited to David Luiz, although it appeared to bounce off the shin of Jara. Chile answered with Sánchez’s goal in the 32nd minute, capitalizing on a lazy pass by the Brazilian midfielder Hulk in his own end.

As the game went into extra time, the exhausted Chileans began to weaken, content to let time run out and try their luck in the shootout. Brazil became more assertive, forcing Chile’s goalkeeper, Claudio Bravo, to make several big saves. But it was Pinilla’s blistering shot that had the best chance, rattling the crossbar, and the nerves of the hosts.

“That near goal was really hard for us,” Sampaoli said, adding, “It would have been a historic moment for Chile.”

Instead, the game moved to a shootout. David Luiz, Marcelo and Neymar all scored for Brazil, leaving everything up to Jara in Chile’s fifth shot. When his shot bounced off the post, the fans in the stadium unleashed a roar so thunderous it seemed as if it could be heard in every corner of Belo Horizonte, if not Rio de Janeiro, São Paulo and even Santiago, in Chile.

Brazil was shaken, but it remained unbeaten in four games, the dream of winning a World Cup at home still alive.

“This was the fourth step,” Scolari said. “There are three more, so that we can reach heaven.”