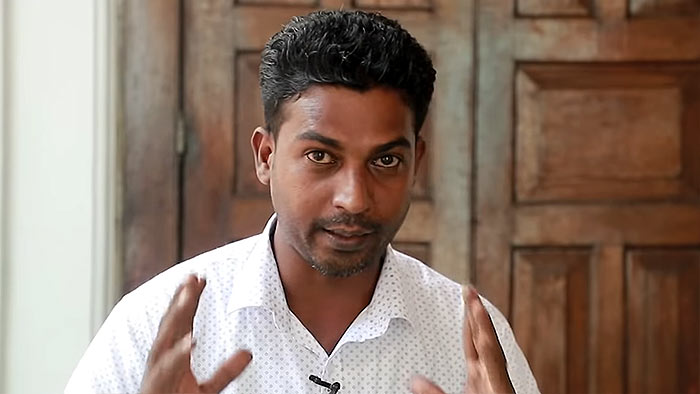 Arun Siddharth, the youth who has embarked on a journey to swim against the popular tide, launched a people’s march on February 28 from Point Dondra, Matara to Jaffna to unify Tamils and Sinhalese to fight against external forces driven by ‘geopolitics’ and ‘neoliberal strategies’.

“My journey will not be easy, I know that,” Arun said in an interview with the Sunday Observer on Friday.

Their days-long march which proceeded through Galle, Kalutara, Kandy, Anuradhapura and Kilinochchi ended on Friday at Weerasingham Hall, Jaffna.

Q: What is the purpose of the people’s march?

A: Sinhalese and Tamils who did not harbour hatred towards each other were ‘deliberately divided’ by forces which had narrow politics in mind, for decades. It is time to come together against these divisive forces that thrive on people’s woes. My effort is to make people see the reality.

I perceive a dangerous trend, in another few years, there could be another issue between the Tamils and the Sinhalese. I want to prevent such an eventuality. Opportunistic politicians will only fuel such prospects, they don’t want people to be united, happy and live in peace.

Q: You said another conflict is inevitable if nothing is done to change the course. Why do you say that, what are the signs?

A: I was born in the North and live there. My father was an ardent member of the Communist Party. He had weapons and political training in China. I grew up with these sentiments. I have been close to politicians in the North. I worked as a journalist for five years.

In 1984, the Indian RAW gave weapons training to Tamil youth and created the LTTE. That influence is still there. Sampanthan, Sumanthiran, Ponnambalam Shivajilingam, Anandi Shashitharan and Vigneswaran, all these people are influenced by the same forces. Through them, their neo liberal agenda is being pushed.

Our big neighbour will never agree to a peaceful Sri Lanka. It will diminish their influence and dominance over Sri Lanka and our resources. An Internal strife is their tool to maintain the dominance. These are policies of neocolonialism exploited by superpowers.

We must try to understand the challenges posed by these external undercurrents and stand together as a nation to defeat them.

Q: Why do you think people should rally round you? What is your background?

A: I was born in Jaffna. My mother, Ulagawathy Arulanandam, is from Chunnakam, my father Arulanandam Arun is from Anjikulam. I studied at a small school in Oluvil. My mother was a teacher and my father was a journalist. He had worked at the Daily News and the Thinakaran.

Later, I came to Hindu College, Colombo, to do my GCE Ordinary Level. My mother was worried about my radical thinking. My heart was always in Jaffna. I kept running back, so she sent me to India in 1994. I did my Advanced Level studies at St. Mary’s College, Madurai. Later, I was sent to Russia to do Medicine. After three years, I gave up studies and travelled around.

During the 2002 peace talks, I returned to Sri lanka.

Then I joined the Weerakesari and worked as a journalist. I covered the LTTE’s media office and Government’s Peace Secretariat.

I had access to first hand information on both sides. I learnt about people’s issues during the time. This made me wonder if the politicians were actually interested in bringing communities together. When I got to know the truth I was devastated.

Q: Is this your way of making an entry into politics in the North?

A: We have severe caste issues in the North. Those are fuelled by fascist concepts. The TNA is talking about democracy, but says they are the sole representative of the Tamils in Sri Lanka. That statement itself is undemocratic. I did not plan to do politics. I was pushed to this corner.

For instance, Wigneswaran studied and lived in Colombo, after retirement, giving his daughter in marriage to a Sinhala person and at the age of 75, he has come to Jaffna purportedly to help people living in misery in the North. This is a joke.

He has only made statements to arouse communal sentiments, all this time. He is not promoting peace and harmony. The last thing he has in mind is the wellbeing of the people.

Q: You said these politicans are backed by India. Powerful Tamil diaspora has also thrown their weight behind them. Do you think your voice can overpower theirs?

A: I agree. They wield money power. They have the media backing. But there is a thing called ‘karma’. They fear my voice. An unseen hand is trying to block my voice from reaching the Tamil people. We once wanted to hold a press conference at the Jaffna Press Club. I tried to book the place many times. Finally, after a week, the press club management informed me that they could not allow me to have a press conference there. They said the Jaffna based political leadership has spoken against it. The press conference was to talk about the issues of the people.

Q: Do you think the people in the North will trust you?

A: I feel sad about the Jaffna people. We proudly say, we have one of the biggest libraries in Asia. But only a visitor will understand the sorry state of the place today. You will come across just a few elderly people immersed in reading the wealth of knowledge there.

The youth in the North don’t read anymore. They are being influenced by cheap south and north Indian films. They read about politics in the newspapers, as a journalist I know, what you read in papers is half truth, mostly sugar coated lies.

Their source of knowledge is electronic and print media, where you get fabricated and doctored stories put out by media mughals who are only serving politicians.

One of the publishing houses is owned by a person who was close to late LTTE theoretician Anton Balasingham. All these media use the word ‘Sinhala Buddhist chauvinists’ frequently. When we hear this term time and again, it adds up to your own vocabulary.

Why do they fear my voice? My motto is ‘I will not agree with your opinion, but I will defend your right to say it.’ People should be allowed to hear me out and then decide to accept or reject me.

Q: Do you have the support of likeminded people?

A: Independent NGOs, civil society groups, social service groups were there in the North, but all those who did not peddle the LTTE ideology were wiped out by the LTTE. The battle against terrorism ended a decade ago, but these units have not been restored. The Tamil people still fear to engage in social service.

Q: What are the genuine grievances of northerners?

A: Even the Buddha said, “Don’t preach those who are in hunger.” Food, sleep, water and sanitation are the basic needs of human beings. Yet many in the North and East are still deprived of these needs. They have become ‘luxuries’ for our people. They also need land to cultivate.

When I go on field visits, I feel utterly depressed to talk to people who are so helpless and who don’t even have basic necessities fulfilled.

People from lower castes, uneducated and poorer sections of the society were shown the attractive slogan of Tamil Eelam. They became the miserable ground fighters, but the powerful-affluent retained the political power.

People have been taken for a ride throughout history. I intend to tell them in a way they can understand and expose this myth. But my path will not be easy. My family receives threatening calls every day. Sometimes they originate from overseas. The TNA is openly attacking me in their webpages, including in their youth page.

These are uncivilised actions.

Q: There is a campaign to indoctrinate a third generation of Tamil expatriates to fight for the LTTE’s homeland theory. What is your message to these youth, who have perhaps not even seen Sri Lanka in person?

A: They demand Eelam in English. Some can’t even speak in their mother tongue. That is the funny part. These children are from countries, such as Canada and France. They are not even Sri Lankan citizens.

We must realise that there is a huge business behind this call. Internal conflicts are created to sell weapons. It’s a vicious circle. Neoliberals target Latin American countries, African countries and other third world countries.

There is enough evidence to prove this – Wikileakes, Edward Snowden, to name a few. What is there to say more, when the US was caught up eavesdropping on German chancellor Angela Merckel?

These imperialistic policies are a serious threat to world peace.

Q: How did you learn to speak fluently in Sinhala?

A: I can speak and understand several languages, such as Russian, German, French, Italian and Dutch. Learning languages is my passion. My father could speak English and Sinhala fluently in addition to Tamil. As a youth, I liked to listen to other languages and imitate their accents. I know that way I can be more close to them. As Nelson Mandela said, “If you talk to a man in a language he can understand, it goes to his head. If you talk to a man in his mother tongue, it goes to his heart.”

I have shown that I can get to their hearts. When I travel to the South, the people are so friendly towards me. They recognise me, speak to me and praise my efforts. I hope to carry on my work and serve the poorest, marginalised people in my area.

1 Response to Team up against divisive forces – Arun Siddharth