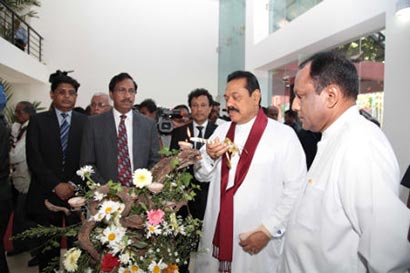 President Mahinda Rajapaksa yesterday said the media are entrusted with the responsibility of guiding people and enabling them to differentiate between truth and untruth and between right and wrong, while performing an exemplary role in society.

The President made these remarks after inaugurating the Media Development Centre at the Government Information Department premises in keeping with the Mahinda Chinthana Forward Vision policy of providing facilities for the development of the media sector.

The President added that the media which have a true attachment to the country and the people, should portray what is actually happening in the country in the aftermath of the 30 year conflict.

“They should bring to light the true situation of the country at a time when a vicious campaign is being launched against the country by certain media organisations with vested interests,” he said.

“Media can play a pivotal role in enhancing amity and cooperation among the communities which leads to everlasting reconciliation,” the President said.

He was of the view that the world should be educated on the development activities being implemented in the country and on the country’s achievements alike.

“The media have to report not only the development initiatives but also our achievements,” he said. The President said that the country has been placed on a rapid development track. “Development has not been confined to Colombo or Hambantota,” the President said. “It extends to also the North and East.”

“People are enjoying the dividends of development achieved in almost all sectors, such as, agriculture, electricity, water, irrigation, power and so on. Above all, a significant step has been taken to build a cordial and strong rapport between people of all communities.”

President Rajapaksa said the new Centre for Media Development will be an ideal place for media persons to carry out research through dialogue. He recollected the services of artistes, such as, Titus Thotawatte, D B Nihalsinghe and several others whose contributions immensely helped develop the industry. Under the guidance of the Soulbury Commission, the Information Department was established in 1948 aiming to make people aware of development activities carried out by the Government. That scope has widened more now.

Speaking on the responsibility of media, the President noted that media should be balanced and impartial. “Not only the black part, the white part should also be revealed. Media has to cultivate positive attitudes among people. People are to love the country since the country is ours. Media can cultivate patriotic attitudes toward the country,” he said.

He said that the voice of LTTE proxies are still heard in the media though the country succeeded in eradicating terrorism from the country three years ago.

The President said that a government cannot prevent their voice from being heard by others. He said these elements are in the process of disseminating various false reports on Sri Lanka to mislead the world.

He said that journalists and the Information Department have a greater responsibility of saving the country from these vicious elements.

The President said that this malicious media campaign against the country should be countered effectively. The media should tell the true situation of the country to the world, he said.

He was of the view that the media should also speak about the massive development taking place in almost all sectors including agriculture. He added that the fertiliser subsidy helped record massive progress in the agriculture sector. When these development activities are reported by Lake House papers, they are branded as the government’s trumpet, he added.

The President added that the media are paying allegiance to a country, ethnic group or region though they transcend geographical boundaries.

“It is the truth that transcends geographical boundaries, he added.

He asked whether the international media are reporting the true situation in African, Arabian and Asian countries.

The President said that most international media have become so strong as to force other countries to safeguard the interests of the country and the power block they represent.