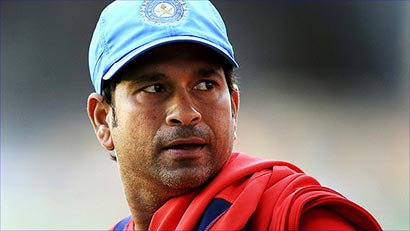 New Delhi: Cricketer Sachin Tendulkar has accepted the Rajya Sabha nomination proposed by the Congress, according to reports. He is the first active sportsperson and cricketer to have been nominated to the Rajya Sabha.

The Home Ministry had recommended four names including those of Tendulkar, Bollywood actress Rekha and industrialist Anu Agha for the Rajya Sabha. Reports say that Rekha and Agha have also accepted the nominations.

Prime Minister Manmohan Singh had written a letter to the Home Ministry on the issue. The Congress had offered to nominate Tendulkar under the President’s quota.

The 39-year-old master blaster who has brought many a laurel to the country through his exploits in the game, and Rekha, known for her brilliant and emotional portrayals in Hindi cinema in the 80s, will become members of Parliament under a provision of the Constitution that allows the President to nominate 12 members to the Upper House.
Article 80 of the Constitution provides for nomination of persons having special knowledge or practical experience in matters such as literature, science, art and social service.

57-year-old Rekha was one of the top heroines of the 80s in Hindi films and had won several national awards in her acting career.

Tendulkar’s nomination to Rajya Sabha came as a surprise against the backdrop of a long-standing demand for conferring of Bharat Ratna on him for his contribution to the game. He completed the historic achievement of scoring 100 international centuries in March this year.

Tendulkar along with his wife Anjali met Congress President Sonia Gandhi at her 10 Janpath residence in New Delhi.

Although officially the Congress said that Sonia wanted to meet Tendulkar and personally congratulate him on achieving the historic achievement of scoring 100 international centuries, but sources say the main agenda was his nomination for the Rajya Sabha.

Reacting to the reports of Sachin Tendulkar’s proposed nomination, BJP leader Najma Heptulla said, “We are very happy that Tendulkar’s name has been proposed for the Rajya Sabha.”

“Tendulkar is a great player, we are proud of him. If he is being nominated, surely he would devote some time to Parliament,” BJP spokesperson Ravi Shankar Prasad said.

However, the proposal didn’t go well with people from the cricket fraternity. Cricket analyst Harsha Bhogle said, “I don’t think it is the greatest idea. He doesn’t have the experience of governing or doing social work. People are trying to gain mileage out of Tendulkar.”

Meanwhile, the Board of Control of Cricket in India (BCCI) welcomed the government’s nomination of Tendulkar as a member of the Rajya Sabha, saying that the iconic batsman deserves such an honour.

BCCI Chief Administrative Officer Prof. Ratnakar Shetty said that the Board was happy with the government’s move. “We (BCCI) are happy that Tendulkar’s services as a sportsperson has been recognised. He’s been a true ambassador for the country and he deserves it,” he said.

In the past, eminent personalities like directors Shyam Benegal, Mrinal Sen and playback singer Lata Mangeshkar had been the nominated members of the Rajya Sabha.