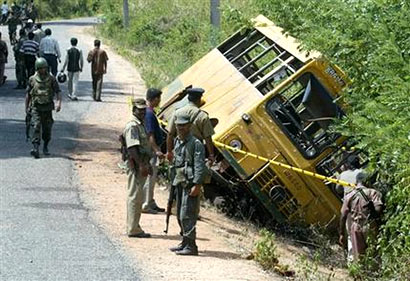 LTTE or its fund raisers and supporters overseas and at home cannot argue collateral damage. The 15th June 2006 massacre was planned, well thought out, cadres designated for roles, type of murder to be committed decided, necessary arms and equipment made ready, the LTTE leader going through all stages of the planned attack and date, time and target deliberated. However, the target was not the Sri Lankan military – the targets were innocent civilians travelling in a bus to work, school or to buy daily provisions. 68 men, women and infants were killed by the LTTE and over 70 left injured. The attack by LTTE against civilians was during the infamous ceasefire agreement.

Kebithigollewa is situated in the Anuradhapura District in the North Central Province of Sri Lanka. 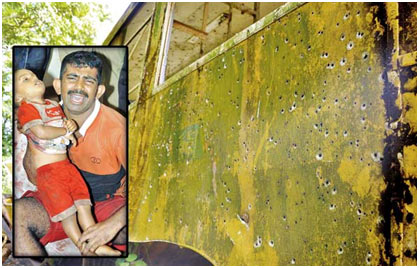 Incidentally, this very picture was hijacked and used for LTTE propaganda against Sri Lanka.

We all know about Geneva Conventions but what we need to know is that they apply during times of armed conflict (international or non-international). The conventions are meant to protect people are are not taking part in hostilities. Of the 4 conventions the 1st applies to treatment of wounded and sick armed forces in the field, the 2nd deals with sick, wounded and shipwrecked members of armed forces at sea, the 3rd deals with the treatment of prisoners of war during conflict (LTTE do not qualify as POW) while the 4th deals with treatment of civilians and their protection during wartime.

In 2006, there was no war situation as a ceasefire was in place. This makes LTTE’s targeting of a civilian bus an act of terror in addition to violation of the 2002 ceasefire agreement. Geneva Conventions do not apply to civilians in non-wartime settings, nor do they have a place in dealing with domestic civil rights issues.

If Geneva Conventions are designed to provide mutual assurances between party nations why are Geneva Conventions applicable to LTTE even in an armed conflict knowing that the bulk of their terror was targeted at civilians throughout 3 decades? None of the pundits in the UN came to the rescue of Sri Lanka throughout the decades that civilians had been targeted outside the war zone or war theatre.

The compelling argument is that while the last phase of the war received unprecedented attention with scores of nations and their leaders, humanitarian groups, HR advocacy groups, media etc running commentaries, statements, debates, writing books and making film documentaries it is rather odd that their actions to daily incidents of terror by LTTE upon real civilians have gone ignored. They all chose to deliver a casual diplomatic statement issued without any emotion or any threat to the LTTE.

Below are a sample of the statements issued following the Kebithigollewa bus massacred.

Statement by the US (Sean McCormack, spokesman)

“ The United States condemns today’s terrorist attack on a bus in Sri Lanka that killed 60 civilians, including at least 15 children. This vicious attack bears all the hallmarks of the Liberation Tigers of Tamil Eelam. It is a clear violation of the Ceasefire Agreement that the Tamil Tigers claim to uphold. The United States calls for an end to the violence that is causing so much suffering for the people of Sri Lanka and resumption of negotiations to bring peace to the country.  The Tamil Tigers must renounce terror and enter into direct negotiations with the Sri Lankan government.”

Note: “bears all the hallmarks of the Liberation Tigers of Tamil Eelam” is not the same as accusing the LTTE.

Statement by the Government of Switzerland

The Federal Department of Foreign Affairs (DFA) was shocked to learn of the attack perpetrated on Thursday morning against a bus in the region of Anuradhapura in Sri Lanka, which killed several dozen people, including a large number of children. The DFA very strongly condemns this attack which has plunged the population of the entire region into mourning and which endangers a fragile ceasefire. Switzerland expresses its condolences to the Sri Lankan population and authorities. It hopes that the perpetrators of this act will be rapidly identified and brought to justice.

Note: Nowhere does the Switzerland Government say the LTTE committed the crime and the number of killed is confined to ‘several dozen’ though the statement was released the day after the bus attack and the Swiss Government was well aware of the numbers killed by LTTE.

“I am horrified at this senseless loss of civilian life, including children traveling to school. This appalling incident is the latest in a series of violent events which have taken place since 2002 ceasefire signed by the Government of Sri Lanka and the Liberation Tigers of Tamil Eelam (LTTE). It highlights the fact that it is innocent civilians, from both sides of the conflict, who continue to suffer the most in this longstanding conflict.

I extend my profound sympathies to all those families and communities affected by this callous act of terrorism, and by other recent attacks that have taken human life. Sri Lanka is a valued member of the Commonwealth family of nations. We are all bound by our belief in the principle and practice of democracy.

“I was appalled to hear of this morning’s explosion in Sri Lanka, which resulted in the loss of many innocent lives, and injury to many others. The fact that several children were amongst those killed was particularly distressing. Our thoughts are with the victims and their families. The British Government condemns such acts of violence unequivocally.

I urge strongly the Liberation of Tamil Eelam to put aside its weapons and to be a responsible partner for peace.

I note the Government of Sri Lanka’s continued commitment to a negotiated peace, and expect them now to uphold democratic standards in respect of civilians of all backgrounds.”

Note: While the UK Government’s statement is commendable, the last sentence does not make any sense at all. The LTTE committed the crime, why is the UK Govt asking GOSL to uphold democratic standards in respect of civilians.

“This attack is much more than a ceasefire violation, it is a grave breach of the most fundamental tenets of humanity”……….“The Government must urgently investigate this case, so that those responsible not only face justice, but the full censure of the international community”.

Note: UNHRC Head too does not mention LTTE as committing the crime.

“This is a gruesome attack on innocent civilians, including children. We send our deepest condolences to their families and to the wounded,” … “We are witnessing a spiral of worsening violence, which is bringing Sri Lanka towards full civil war. Norway requests an immediate halt of all violence in Sri Lanka,” says Minister Solheim.

Note: Again, no mention of LTTE by name. What was noteworthy about Norways statement was that it had tabulated 519 people as having been killed since December 2005.
The Sri Lanka Monitoring Mission claimed that it was highly probable that LTTE or supporters carried out the Kebithigollewa attack.

The best was by BBC who said that if the LTTE had done it they would have admitted it!

The statements highlight a very clear and distinct double standard at play throughout Sri Lanka’s conflict.

The massacre was just one of scores of others that happened almost every day, every month and every year.

What the world needs to realize is that there is a big difference in the civilians of the last phase and the civilians that the LTTE attacked throughout 3 decades.

The civilians of the last phase of the conflict have a very ambiguous tag to their ‘civilian status’ primarily because we do not know how many took part in acts of hostility, however small, voluntary or by force. They are unlikely to admit to having taken part in hostilities either knowing that in a court of law they stand accused. Making the distinction more difficult is the fact that the LTTE had a civil force of people taken from various areas and regularly trained by LTTE cadres. They were given training in various areas and LTTE even designated titles for them if they were to die for the cause. In such a situation, there is a big question mark as to who the real civilians were in the final phase of the conflict. Yet, the UN aware of these realities as were scores of HR/NGOs and other activists projected a notion they were all civilians despite knowing the blurs in that distinction.

If, violations to civilian lives that were targeted and killed by the LTTE in peace time and during ceasefires do not conform to Geneva Convention laws given that they are outside wars, why have the UN and its pundits taken pains to ensure that LTTE international proscribed terrorists enjoy all the international laws and treaties which they are not even signatory to or care too hoots about?

If the UN has failed at all it is the intentional ignoring of civilians that were target of LTTE over the years.

If the International Community has failed it is the intentional ignoring of clamping down on LTTE overseas offices, LTTE fundraising, LTTE events and LTTE terror campaigns to which foreign parliamentarians have even participated and delivered speeches and some former leaders are now holding CEO positions in these UNSC banned LTTE fronts.

There are scores of families ready and prepared to come forward and give real evidence of how their children were taken away and killed by the LTTE, families who had lost their loved ones or who have to take care of those who have been left injured by the LTTE. There are scores of wives and families of soldiers who are missing the dead and for these and more crimes the LTTE and all associates need to be charged under domestic laws.