The myth of the rule of Law in an American Police State – and America preaches to the world!!!

The country that proclaims to be the shining example of freedom of every kind cannot escape the harsh realities that questions how far Americans are living in a free state. Tragically, most Americans do not know or realize how successive Governments have been fooling them – now America is a country in debt, majority of its citizen’s impoverished suffering numerous health issues, its war veterans depressed and under medication and American politicians believing it can still dictate to the world because the Companies that rule them say so. Moreover, the example of the Indian diplomatic passport holder being subject to a series of American Laws, legality of which denies even India to question the humiliation should seriously make India and the Rest of the World to wonder how safe it is for them to live or even visit the US. http://www.policestateusa.com

By the time people in America begin to realize that America is now a police state it would have been too late. Former top NSA official William Binney, declared that “We (the US) are now in a police state.”  The mass spying conducted by the Obama regime, Binney says “is a totalitarian process.”

Americans have no freedoms: A country that demands freedoms and rights has been exposed for systematically collecting information on all telephone calls placed in the US. Americans find themselves dumbfounded that this invasion of privacy has been going on since 1970s. Americans do not have any privacy left – they are being monitored – telephone calls, conversations, telegrams and the US is even intercepting laptop computers ordered online.

Americans under a militarized police: there are almost 13,000 agencies in the 50 states of the US and 4 territories given training in local law enforcement. These SWAT teams are used to carry out routine law enforcement even delivering a warrant.

Americans are being shot at: Shooting unarmed civilians is illegal – but not in the US. Rising reports of police shooting at unarmed citizens – one such example was a 19 year old from Seattle who was shot in the leg by police after she refused to show her hands!

Americans are losing their private property: When the US Government tells American citizens what they can and cannot do inside their own homes it means you are no longer the owner of your property. When US law enforcement can break down doors, kill the dog, damage furnishings, terrorise the entire family it translates to mean that the US Government is showing that the property belongs to the State.

Americans have no body integrity (strip searches): Violating the 4th Amendment to the US Constitution which was meant to protect against citizens being subject to ‘unreasonable searches and seizures’ by government agents, today both property and bodies are permitted to be searched without warrant. The moral intent to protect human dignity should not deny humans their dignity!

American drones – killing civilians with impunity: An estimated 30,000 is said to occupy US airspace by 2020 ($30billion annual industry). These unmanned aerial vehicles come in all shapes and sizes, even nano-sized drones as small as a grain of sand – they conduct surveillance as well as possess capability to detonate. California police are using Qube drones which can hover for 40 minutes at heights of 400ft to conduct surveillance on targets as far as 1km away. Michael Downing, Los Angeles Police Dept deputy chief for counter terrorism says that drones will be flown over large-scale media events (Oscars) as well as survey political protests too.

American children victims too: Even 9 year olds are suspended for pointing a toy at a classmate and saying ‘bang bang’ in a country once famous for playing ‘cowboys and Indians’. Two 6 year olds had been suspended in Maryland for using imaginary ‘finger’ guns in the schoolyard playing cops and robbers – replicating what they view as cartoons. Instead of removing such cartoons the children are being reprimanded! http://www.huffingtonpost.com/2013/10/01/jordan-bennett-suspended-_n_4022494.html

A whole new list of laws and regulations are today taking shape within a wicked framework of partnership made up of Big Wigs in Government and Big Corporations. The ‘police state’ forming itself will translate to mean a corporate take over of America where political bureaucracy will be foolishly handed over to Companies and their Boards. The current politicians acting already as pawns are likely to be given status of CEOs in the Corporate State that is taking shape. With the ordinary people being denied their basic and fundamental human rights and with little access to their representatives to even convey their thoughts and feelings we can only ask what type of ‘Democratic Governance’ prevails in the mighty United States of America?

America has been passing judgment for years preparing dossiers on what countries do not do or should do and accusing countries of human rights violations, denial of media freedoms and rights while silently drafting laws and regulations that would curtail their own people. 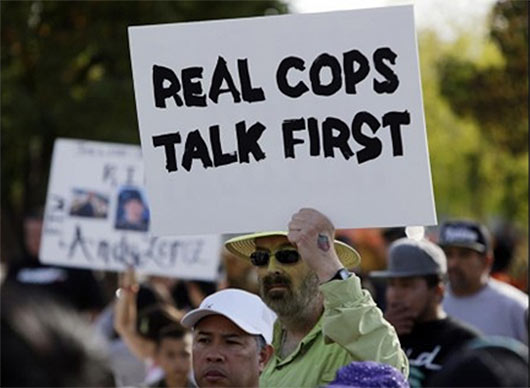 A protester hold a sign in reaction to a police shooting outside of the Sonoma County Sheriff’s department on Tuesday, Oct. 29, 2013, in Santa Rosa, Calif. Hundreds of people have gathered in Santa Rosa to protest the fatal shooting of a 13-year-old boy by a California sheriff’s deputy. Andy Lopez was shot by a Sonoma County deputy last week after authorities say the deputy mistook a pellet gun Lopez was carrying for an assault rifle. Credit: AP

Representatives/Senators of the US Congress were given only a few minutes to brisk through 2-3pages of the US Patriot Act before it was passed. They had been given no time to read through the Act – they all signed because they did not wish to be termed ‘unpatriotic’. It was later that Lieberman, Daschle and Gephardt declared they had given Bush ‘near dictatorial powers’.

In short we are talking about a country where its Government has passed laws to avoid punishment for murder, gives itself the right to siege any American city, use FBI for terrorist attacks, spy on US citizens, intimidate US citizens, brand anyone a terrorist, ignore the Bill of Rights entirely, illegally imprison American citizens, loot tax payers money – under the heading of ‘civil disturbance planning’ the US military is training troops and police to suppress democratic opposition in America (Dept of Defense Civil Disturbance Plan – code named Operation Garden Plot) .

The tragedy is that most Americans do not even realize what is going on or how badly they are being deceived by the Federal Government.

They are being sold the story that the American Government is doing its best to keep them safe – that safety is however slowly denying individual rights and taking away their freedoms without the Americans even realizing what is happening.  What has America gained in return for $6 trillion and one million injured soldiers, many very severely?

Moreover, the few who are aware don’t even know what to do about it. The situation is made worse because the media which is corporate media owned by corporates who in real terms runs the Federal government makes sure that the people know ONLY what they need to know and Americans in general are absolutely clueless about the sins that the American Government commits and has been committing over the years. We need to seriously wonder whether the diagnosis of Americans and subjecting them to anti-depressants and other medications is actually a sinister move to keep Americans like zombies and we need to also wonder if the same is being done to US servicemen as well as the pharmaceutical industry is one of the world’s key players and profits from the invasion and occupation of nations just as the food and construction industry.

Thomas Paine said ‘It is the duty of the Patriot to protect his country from his Government’ – It is time America and the rest of the world begin to wake up.

Thomas Jefferson said “Evil triumphs when good men do nothing’ – It is now time for the GOOD MEN of the world to do something.

Home » The myth of the rule of Law in an American Police State – and America preaches to the world!!!