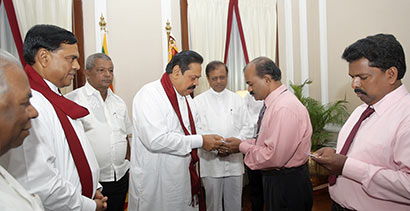 Vice Chairman of the Wadamarachchi Pradeshiya Sabha E. Santhasorupan and Vice Chairman of the Point Pedro Pradeshiya Sabha M. Logasinhem met President Mahinda Rajapaksa and pledged their support to the government today on 22 August. Both Tamil provincial leaders are representatives of Tamil National Alliance (TNA) from Jaffna Peninsula. They have crossed over to the United People’s Freedom Alliance (UPFA) and extended support to the government and became members of the Sri Lanka Freedom Party (SLFP) during the meeting with the President at Temple Trees.

The two TNA stalwarts said that they join the government due to the extensive development programme is being carried out in the North by the government after eliminating terrorism. Former TNA local politicians also stated that they will not be able to serve the people in the area while standing with the TNA. Senior Minister Athauda Seneviratne, Ministers Basil Rajapaksa and Susil Premajayanth, Coordinating Secretary to the President (Trade Unions) Sumith Wijesinghe and Coordinating Secretary of SLFP, A.Ariyaratne were present at the meeting.

Meanwhile K.T. Rajasingham, one of the senior most members of the SLFP, announced that he is coordinating the election campaign with the view to ascertain the victory of the 15 candidates contesting in the UPFA ticket in all 5 districts of the Northern Province. He made these remarks at a Press Conference held at the Green Grass Hotel in Jaffna. The UPFA candidates declared that their victory is certain in the forthcoming Northern Provincial Council Election

Veteran journalist K.T.Rajasingham further stated that the victory of the UPFA in the North has been already assured while TNA leaders are continuing with their foreign trips and collecting funds from the Tamil Diaspora and also of the secret funds they receive from the international donors with the mischievous intention of bifurcating the country.

Mr. Rajasingham said he joined the Sri Lanka Freedom Party in 1968 and was also the Chief Organizer of the SLFP for Udupiddy Electorate from 1970 to 77. As he was targeted by the militant groups, he was ‘on the run’ till 19 May 2009 the day the Sri Lankan Forces were able to defeat terrorism and the separatism in the country. He said that enough mud have been slung on him, when he was fighting to save the unity and the oneness of the country. After a lapse of 28 long years, he said that he came back to Sri Lanka after the Presidential Election in April 2010 and continued to visit the country on a regular basis and has shown keen interest in country’s reconciliation and development activities.