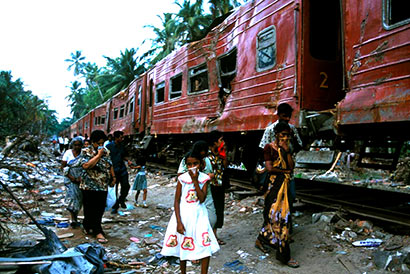 The 11th year commemoration of over 40,000 people who were killed in the Tsunami catastrophe in December 26, 2004 will be held at district level. Religious observances will also be organised parallel to the event.

Thirteen administrative districts of the country’s coastal belt bore the brunt of the disaster while approximately 35,000 lives were lost.

Over 5,000 were reported missing while 95,000 were deprived of their livelihood.

“Ceremonies to commemorate those who died will be held at district level which will include religious observances,” Disaster Management Centre Deputy Director Pradeep Kodippili said. “However, the national ceremony will not be held this year”.

He said awareness programmes and drills will be held in 14 districts.

Kodippili said awareness programmes are held monthly including in schools.

The Tsunami was triggered by a massive earthquake off the Indonesian coast leaving more than 230,000 people dead in 14 countries.

Tsunami survivor Iresh of Kahawa, Ambalangoda who lost two family members, said: “It is an incident that we need to forget although we can’t. It was an unexpected tragedy and it haunts us every day.

I think this would be the same with almost all relatives of 40,000 people in this country who died within a few hours. I think this situation could be more serious for parents whose children were washed away like mine.”