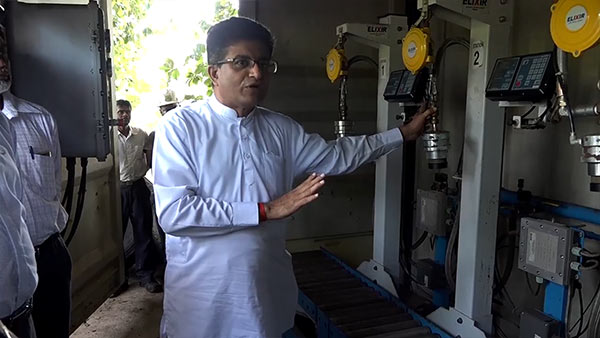 Energy Minister Udaya Gammanpila recently alleged that the Ceylon Petroleum Corporation (CPC) had suffered Rs 37 mn loss due to an abortive bid made by the state enterprise to enter the LPG (liquid petroleum gas) in 2008.

Lawmaker Gammanpila, who is also the leader of the Pivithuru Hela Urumaya, said that the CPC had made the attempt in violation of an agreement with Shell and Laugfs Gas to supply its entire output of LPG from the Sapugaskanda refinery to the above mentioned companies.

The Minister said so after inspecting an abandoned gas filling facility at the CPC facility at Sapugaskanda. The visit took place, on Thursday (24), after a three-member committee headed by the Energy Ministry’s head of Internal Audit D. P. S. J. Kumara inquired into the failed operation.

The CPC undertook the project during former national cricketer Ashantha de Mel’s tenure as the CPC Chairman. A. H. M. Fowzie had been the minister in charge of the subject.

The Minister called for a report when the media revealed that the facility had been abandoned a decade back.

Gammanpila vowed to reveal the person who had caused losses to the CPC, having misled its Board of Directors as regards the viability of the project.

The PHU leader requested state enterprise Litro Gas to explore the possibility of accommodating the facility in its current production setup. The minister described the facility installed at Sapugaskanda as technologically outdated even at the time 2008 administration acquired it.

Declaring that Sri Lanka had substantial natural gas deposits in the Mannar basin, the Energy Minister said that the government intended to enter the gas market. Attorney-at-law Gammanpila said that a new enterprise would be established under the CPC to provide healthy competition.

Addressing the post-Cabinet media briefing on Sept. 10, co-Cabinet spokesperson Gammanpila said that Surath Ovitigama had been named the Director-General of the Petroleum Resources Development Secretariat and Saliya Wickramasuriya had been appointed advisor.