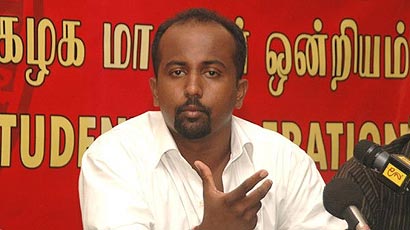 Udul Premaratne, Convenor of the Inter University Students’ Federation, was released on bail this morning.

When his bail application was taken up, Deepali Wijesundera, Colombo High Court Judge, enlarged Premaratne on bail in Rs. 50,000 and two surety bail in Rs. 500,000 each.

The bail conditions stipulated that Udul Premaratne should not engage himself in any activities of the Student Federation and pasting posters until the case against him was over.

Premaratne was taken into custody in October on charges of damaging public property estimated at Rs. 100,000.