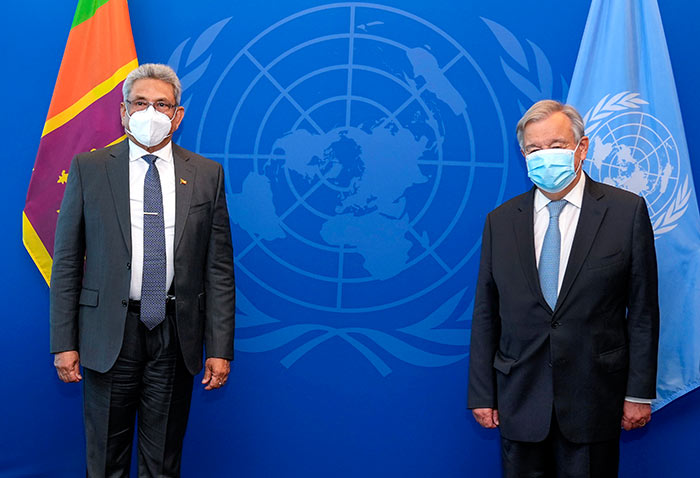 The United Nations Secretary-General Antonio Guterres has told President Gotabaya Rajapaksa that the UN will provide its full support to Sri Lanka in moving forward to promote unity among different communities.

The UN Secretary-General made these remarks during the meeting he held with the President at the United Nations Headquarters in New York, yesterday (19).

Mr. Guterres, warmly welcomed President Rajapaksa when he arrived at the United Nations Headquarters, reminisced about his visits to Sri Lanka in 1978 representing the Inter-Parliamentary Union and his visits to Kandy, Anuradhapura, Polonnaruwa and Trincomalee.

Mr. Guterres also recalled his dealings with Sri Lanka during his tenure as the United Nations High Commissioner for Refugees and his meeting with then President Mahinda Rajapaksa in 2006. The Secretary-General noted that Sri Lanka, as a country which plays a more active role in social and economic spheres in the Indian Ocean region, the UN is expected that Sri Lanka would continue to do so in the future too, despite the crisis that has plagued it for nearly 30 years.

President Rajapaksa briefed the UN Secretary- General on the challenges facing a country like Sri Lanka with a small economy in the face of the COVID epidemic. President Rajapaksa spoke at length on the impact of the COVID-19 epidemic on education and the economy of Sri Lanka and thanked the World Health Organization for its support to overcome the pandemic.

The President pointed out that more than half of the total population has been fully vaccinated and that all arrangements have been made to fully vaccinate all those over the age of 15 before the end of November, by showing the statistics. The Secretary – General commended the progress made by Sri Lanka in the vaccination drive.

The President pointed out that the Covid-19 pandemic was a major obstacle to fulfilling the pledges made to the people when he became the President in 2019. Even amidst this situation, the President elaborated on the steps taken to address the issues arose in the aftermath of defeating terrorism that lasted for over 30 years.

The President explained the compensation paid to the victims, the transfer of lands back to the owners and the massive development carried out in the North and East Provinces since 2009 under the guidance of President Mahinda Rajapaksa and the opportunity given to democratically elect the representatives to the Northern Provincial Council.

The President informed the Secretary-General that the government would take immediate action with regard to missing persons and expedite the efforts such as issuance of death certificates.

The President pointed out that many youths who were arrested as suspects over terrorist activities were released after he came to power. The President informed the Secretary-General that legal action would be expedited with regard to rest of the personnel who could not be released, and that he would not hesitate to grant a presidential pardon to the Tamil youths who have been in custody for a long time, taking into account their long-term detention and after the legal process was completed.

The President stated that his objective is to strengthen the democracy in Sri Lanka and accordingly, there are no baton attacks or use of water cannons on protesters under his government, and that a separate area has been set aside for protesters near his office. President Rajapaksa also explained the engagement with civil society organizations to bring about development and reconciliation in the country.

The President said that the internal issues of Sri Lanka should be resolved through an internal mechanism of the country and said the Tamil Diaspora would be invited for discussions in this regard.

President Rajapaksa said that he was always ready to work closely with the United Nations and added that though he could assure that there is no room for separatism to re-emerge in Sri Lanka, Sri Lanka as a government as well as other states should be vigilant about religious extremism.