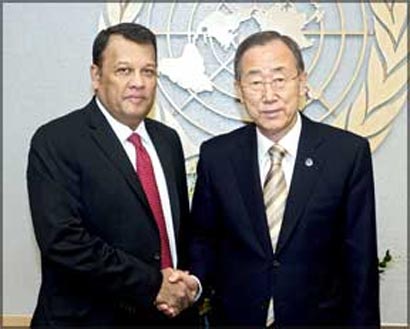 The meeting was held as part of the UN’s ongoing dialogue with the Sri Lankan government about accountability issues centred on human rights and post war reconciliation process, Minister Samarasinghe’s aides told the Daily News from New York yesterday.

Minister Samarasinghe is in New York attending the meeting of the Social, Humanitarian and Cultural Affairs Committee of the 66th session of the UN General Assembly.

Moon had said that he was pleased with the action taken to release LTTE cadres after rehabilitating them.

Fox and Nambiar had reportedly praised the government for its speedy recovery after the war in terms of resettling those who have been internally displaced by the war.

Minister Samarasinghe had told Moon, Fox and Nambiar that the government has started a national dialogue with all political parties to achieve an amicable solution to their problems after the war.

He apprised Moon about the progress the government has achieved in the sphere of national integration and reconciliation after the war.

He also mentioned the supportive role played by the Security Forces to speed up the resettlement process in the North and East.

He told the UN Chief that the government is committed to protect the human rights of all communities in Sri Lanka.