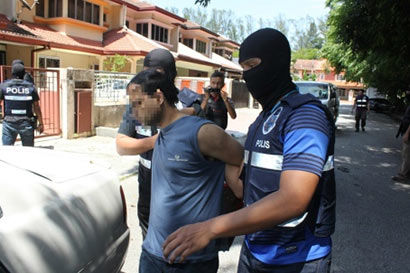 Suddenly not only are LTTE emerging alive from the dead at least that was what internationally accepted reports initially revealed to embarrass Sri Lanka, but now supposed ‘refugees’ holding UNHCR passes are being arrested as well. Quite a lot of unlawful activities are taking place all revolving around the world’s favorite terrorist organization the LTTE. Moreover, having banned the LTTE in 32 nations, these countries to spite Sri Lanka obviously are even making a mockery out of their own ban by allowing LTTE to hold memorial services for dead LTTE terrorist cadres and we believe it is only a matter of time that the LTTE will soon call for Eelam in those countries raising the curtain for upcoming troubles.

The Malaysian Police have arrested on 15th May in a special operation conducted by the Special Branch’s Counter-Terrorism Division 3 LTTE suspects from different locations.

We are not in the least surprised that they held UNHCR refugee cards and this clue provides the basis for our continued argument that the LTTE was enjoying explicit nod of approval by Western NGOs/INGOs and even Western Governments. Now our doubts are being proved correct as truth has a funny way of emerging when one least expects.

What should embarrass the UN and Navi Pillay ever ready to produce the red card against Sri Lanka is that the 3 LTTE suspects had left Sri Lanka obtaining UNHCR refugee status during the infamous cease fire agreement in 2004 and demands that the UN Agency release the entire list of Tamils to whom such refugee passes had been given over the years for we may be able to find out more breathing corpses and plenty of other LTTE operatives in foreign shores.

The Malaysian police have also seized LTTE propaganda materials, media equipment and foreign currencies from 24 nations equivalent to RSM20,176.53. This means that LTTE has been having a smooth run in 24 nations which would also provide a good basis for their illicit network of activity as well as money laundering and other illegalities.

We appreciate the statement of Malaysia’s Inspector General of Police ‘We will not allow the country to be used as a place for them to hide or conduct any terror activities in the country or on foreign soil’. The quote is good enough to be sent to all the nations that presently molly cuddle the tiger remnants or rather the tiger sponsors living plush lives on foreign climes fooling those in Sri Lanka to take the gun and fight the Sri Lankan military so that they can find new ways to fatten their bank accounts by indulging in various deals that have not benefitted any of the LTTE cadres that foolishly laid down their lives or the families whose children were forcibly plucked and made into killers. A good look back will show that the martyrdom has nothing whatsoever to do with justice for any Hindus but a bigger plan that remains alive in the countries that had been supporting the tigers over the years. The diaspora has much to shoulder in terms of accountability just as those who have fooled and continue to fool the Tamils.

Nevertheless, what needs to be continuously reiterated is that with the emergence of K. Thayapararaja from the dead and now refugees who are really not refugees but are LTTE operatives and then demands to hold LTTE memorials on foreign shores put together we can imagine where the ‘dead’ actually are living in and it should embarrass the foreign nations for keeping these LTTE supposed ‘dead’ alive on their shores while carrying out a smear campaign accusing Sri Lanka of falsely torturing and killing them to which the UNHRC head Navi Pillay and the organs of the UN have all been complicit in.