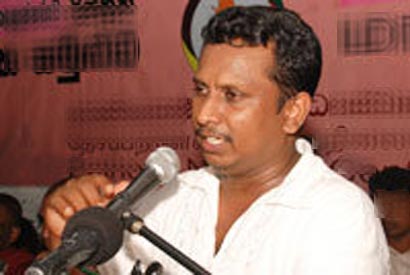 The UN panel on human rights violations is coming and the Wansa has forgotten all about those death fasts, says former parliamentarian of the Janatha Vimukthi Peramuna, Samantha Vidyaratna.

Addressing a group of party members in the Ikiliyagoda area in Mahiyangana, he said that one had to remember that there was a big difference between developing the nation and hiding behind a cover of patriotism for one’s own personal gain.

“There were many who were harping and barking with patriotism. When the UN chief was appointing a panel to look into human rights violations said to have taken place in Sri Lanka, there were some who embarked on fast-unto-death campaigns.

“Now that panel is coming to Sri Lanka to look into it and suddenly, the Kakkutu Wansa has forgotten all about those death fasts.

“So we must remind them that the way to develop the nation is one thing and making use of patriotism for one’s own personal gain is another,” said Vidyaratna.

1 Response to UN PANEL IS COMING AND WANSA HAS FORGOTTEN DEATH FASTS: JVP