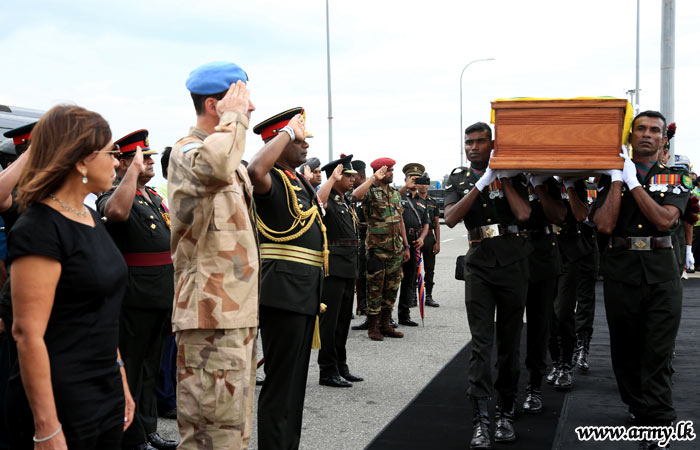 Coffins of Late UN Peacekeepers Formally Accepted amidst Military Honours at BIAA fitting military parade with presentation of arms, plus a dignified ceremony in the presence of a distinguished gathering, including the Commander of the Army, UN Resident Coordinator, UN Force Commander, MINUSMA, Sri Lankan and MINUSMA Officers, Colonels of the Regiments, Directors, Regimental Sergeants and a representative gathering of all ranks accepted the remains of Major W.D Jayawickrama and Sergeant S.S Wijayakumara who made the supreme sacrifice while serving the UN Peacekeeping Mission in Mali (MINUSMA) when UN flag draped coffins arrived at the Bandaranaike International Airport (BIA) on Monday (4) afternoon.

The solemn red-carpet ceremony that paid tribute to the invaluable overseas service, both of them performed on behalf of all Sri Lankans got to a start soon after Lieutenant General Dennis Gyllensporre, Force Commander, MINUSMA formally handed over both UN flag-draped coffins to the Commander of the Army, Lieutenant General Mahesh Senanayake. Just a few seconds later, parade troopers in conformity with military traditions after draping the coffins with Sri Lankan National Flags handed those UN flags back to the visiting MINUSMA Force Commander, symbolizing the formal acceptance on the part of the troop contributing country (TCC).

A few seconds later, both coffins were laid on gun carriages and troops presented a salute before they began inching out of the premises to be taken to the Negombo Hospital for post-mortem and other formalities.

Major Mats Ivarsson, Aide De Camp to the Force Commander, Victor Berggern, and Petter Storm Macs are the other members of the UN MINUSMA delegation who arrived here with the coffins, in addition to a few MINUSMA serving Sri Lankan Officers.