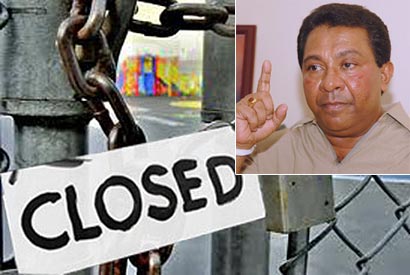 21 universities and educational institutes, except the Faculties of Medicine have been closed from yesterday until further notice.

The Minister of Higher Education S.B.Dissanayake has taken this decision in terms of the powers vested in him by the University Act No 16, 1978 after having discussed the present university crisis with Vice Chancellors and Directors of universities and academics not involved in the Federation of University Teachers Association’s trade union action.

The Minister issuing a message in this connection said that he suspected political motives behind the trade union action by FUTA to create a political crisis leading to regime change. The Minister explained that the government took every possible effort to resolve the matter through negotiations, and had a series of discussions with FUTA at Ministry level.

He said FUTA had a series of discussion with Secretary to the President Lalith Weeratunga and the Minister of Economic Development Basil Rajapaksa without success. The minister said FUTA has not agreed to resolve this matter amicably due to some unknown reasons which may be due to political reasons.

The Minister stated that when the prevailing situation in the academic crisis is analyzed, it is very clear that there are some invisible parties who want to use this crisis to achieve their petty political motives while they do not seek any positive alternatives to resolve the matter amicably.

The Minister explained that there were  around 10 discussions and exchanging of letters, drafts of MoU etc and with all these genuine efforts by the government the FUTA did not agree to resolve the matter.

He said that the government in principle agreed to grant 5 of the 6 demands presented by the FUTA, except the demand for a 20% salary increase.  He said that it is very clear that their aim is to create instability and a political crisis leading to a regime change.

The Minister said that in respect of the demand for a 20% salary increase it was clearly indicated to FUTA that for the time being it is unable to accept that demand since it may create many discrepancies and anomalies in the national salary structure leading to other repercussions. The Minister explained that during the last one year period, the government has given them a total salary increase from 36 percent to 83 percent through various allowances and payments. He further said that the government proposed to appoint a special Presidential Commission on Higher Education and to establish a Post Graduate University in the future.

Minister Dissanayake said that the government has clearly communicated the above facts in writing to the FUTA and the FUTA was dragging this trade union action without any reasonable reason.

The Minister also said that there are universities, institutes and faculties not participating in the trade union action at all. These are: Uva Wellassa University, South – Eastern University, Buddhist and Pali University – Homagama, Buddassrawaka University – Anuradhapura, Yakkala Wickramaarchchi Ayurvedha Institute, all medical faculties except Ruhuna University Medical Faculty.  He also said that in some universities various percentages of academics are performing their lectures, exams and other workshops and research activities.

The universities and institutes that were closed from yesterday until further notice are:

University of Colombo except the Faculty of Medicine

University of Peradeniya except the Faculty of Medicine

University of Sri Jayawardenapura except the Faculty of Medicine

University of Kelaniya except the Faculty of Medicine

University of Jaffna except the Faculty of Medicine

University of Ruhuna except the Faculty of Medicine

University of Visual and Performing Arts

The Open University of Sri Lanka

University of Colombo School of Computing