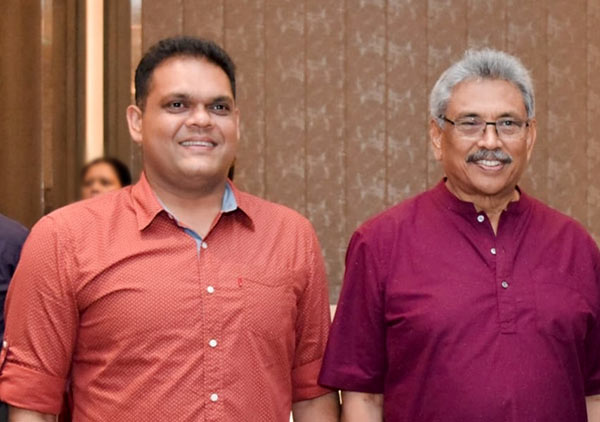 Joint Opposition (JO) lawmaker Shehan Semasinghe, yesterday, said that the UNP was all out to disqualify wartime Defence Secretary Gotabaya Rajapaksa from contesting 2019 presidential election or to do away with the executive presidency.

Anuradhapura District MP Semasinghe was commenting on UNP leader Ranil Wickremesinghe’s bid to secure cabinet approval for a move to abolish the executive presidency on Friday (20).

Semasinghe pointed out that the constituents of the UNF had met at Temple Trees a couple of hours after SLPP General Secretary Sagara Kariyawasam paid the deposit on behalf of candidate Gotabaya Rajapaksa at the Election Commission.

UNP leader and Premier Wickremesinghe’s bid to contest the Nov 16, 2019 presidential election should be examined against the backdrop of his party’s efforts to disqualify Gotabaya Rajapaksa, Semasinghe said.

Responding to another query, Semasinghe pointed out that no less a person than the former Director General of the Commission to Investigate Allegations of Bribery or Corruption (CIABOC) Dilrukshi Dias Wickramasinghe, PC, had admitted that her outfit received orders from the current dispensation.

The MP said that the Solicitor General’s leaked telephone conversation with Avant Garde Chairman Nissanka Senadhipathi shouldn’t be taken in isolation but examined in terms of the overall UNP project meant to bring the Rajapaksas to disrepute.

In the run-up to the last presidential election, the previous Rajapaksa government had been accused of waste, corruption and irregularities, MP Semasinghe said. Former President Rajapaksa alone was accused of having as much as USD 18.5 bn stashed away in offshore accounts, lawmaker Semasinghe said.

Responding to another query, Semasinghe claimed that the UNP and its allies lacked political will and the strength to face Gotabaya Rajapaksa in a presidential contest, hence foolish attempts to somehow deprive the former defence secretary certain victory.

Referring to two civil society members recently lodging a complaint with the Criminal Investigation Department (CID) regarding the then dual citizen Gotabaya Rajapaksa’s role in Mahinda Rajapaksa’s 2005 presidential campaign, Semasinghe asserted that the UNP’s fear of the SLPP candidate was showing.

The UNP and its allies planned their campaign on the premise that the US would turn down Gotabaya Rajapaksa’s decision to renounce his US citizenship, the MP said. Having failed to deprive the former Defence Secretary of an opportunity to contest 2019 presidential on the basis of his inability to get rid of the US citizenship, the government was now pursuing various avenues to block him, Semasinghe charged.

Semasinghe said that the UNP had realised that since the last Local Government polls in February 2018 its standing had sharply deteriorated due to further mismanagement of the economy and the Easter Sunday attacks.

Responding to another query, the MP said that their campaign was on track. President’s Counsel Wickramasinghe’s admission as regards political interference in investigations couldn’t have come at a worse time for the party whose leaders were under investigation over various charges.

MP Semasinghe said that a section of the media recently reported as to how Dilrukshi Wickramasinghe sent in her retirement papers to contest the presidential election. However, subsequently, Wickramasinghe withdrew her letter, MP Semasinghe said, adding that the Attorney General’s Department couldn’t afford not to conduct a thorough inquiry into the Solicitor General’s conduct. The MP said that there had never been a similar statement from an official holding such a responsible position in the public sector. The MP added that the Attorney General Department’s controversial handling of the Easter Sunday suicide bomber Zahran Hashim’s case should be studied against the backdrop of political interference in investigations.