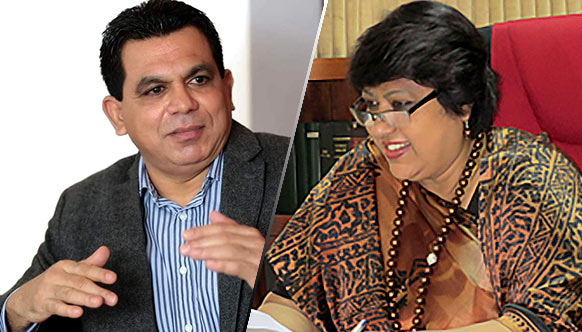 Former Director General of the Commission to Investigate Allegations of Bribery or Corruption and   current Solicitor General, Dilrukshi Dias Wickremasinghe, must reveal to the country the politicians who pressed her to take action against Avant Garde, the Chairman of Avant Garde, Nissanka Senadhipathi, said.

If she reveals the names of politicians who pressed her to file cases against Sri Lanka’s number one business, as she claimed herself, people in the country will admire her, he added.

Senadhipathi emphasised that when she referred to his business as Sri Lanka’s number one business, she had accepted the legitimacy of his business, told Ceylon Today.

According to the voice recording in question, only I was aware of 7,500 letters related to my business, Senadhipathi said, adding that filing cases, after reading all those letters and talking admiringly of the manner he looked after the families of the officials of the company, further proves that filing this case was an illegal act.

Senadhipathi emphasised that he did not, at any time, doctor the said voice recording as Dias claimed, and that the recording contains the entire conversation he had with her.

“If she claims that the voice recording had been doctored, I would like to ask whether there is any unusualness in her words,or the words contained in the conversation,