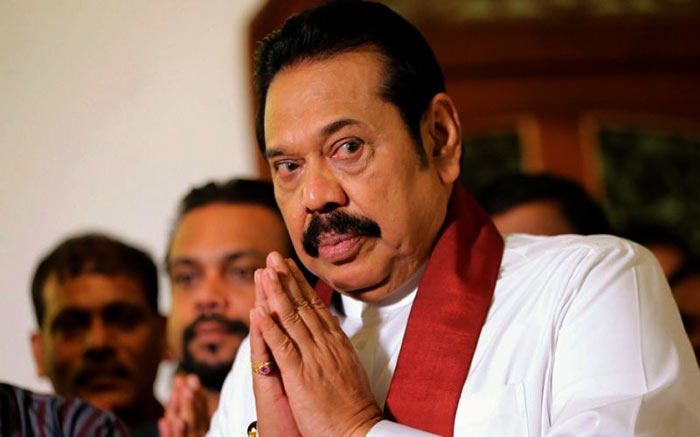 He made this statement while announcing his resignation as the Premier at his residence in Wijerama Mawatha Colombo.

Full text of the media release is given below:

Our pledge to the people

English translation of the text of a speech made by former President Mahinda Rajapaksa at his Wijerama Mawatha residence on 15 December 2018.

Most venerable members of the Maha Sangha, Clergymen of all religions, Members of Parliament, Ministers, and dear friends,

The Supreme Court has delivered a judgement against the holding of the general election that had already been declared. Since that judgement is a long and complicated document, I will study it carefully and in due course express my views on the constitutional impact it will have on the functioning of the parliamentary system of government in this country. Today however, I wish to speak on the political implications of not being able to hold the general election that had already been declared. We are now in direct confrontation with a group of political parties that have continuously engaged in various subterfuges to avoid facing elections. When this group of political parties tried to get the local government elections postponed indefinitely by petitioning courts over the delimitation of wards, we were able to hold the local government election only because the Chairman of the Elections Commission intervened and declared that he would hold elections at least in respect of the local government institutions that had no delimitation issues pending before courts. If not for that intervention, the people would not have got even the local government election.

Elections to provincial councils have been delayed by more than one year and three months, but no one has any inkling of when those long overdue elections will be held. The law has been manipulated in such a way that those elections will be put off indefinitely. In September 2017, when the Attorney General said that a two thirds majority will be necessary to pass the law designed to postpone the provincial council elections, the then government kept Parliament going till night time and with great effort, mustered the necessary number of MPs to get the law passed. So desperate were they, that when some smaller political parties said they would not vote for the law unless the proportional representation quota was increased from 40% to 50%, the government agreed to that demand in the corridors of Parliament so as to get the required number of votes. They had to perform demeaning contortions to get the provincial council elections postponed.

The people have now been deprived of the general election that had already been declared. After the President dissolved Parliament on 9 November, the political parties opposed to the election petitioned courts and obtained a stay order on the dissolution and with the cooperation of the UNP Speaker, they engaged in various activities to demonstrate that they had a majority in Parliament. But it was only on 12 December when a resolution was passed expressing confidence in Mr Ranil Wickremasinghe and requesting that he be appointed Prime Minister that the people of the country were able to see the real state of things.

A total of 117 MPs voted calling for Mr Ranil Wickremasinghe to be appointed as Prime Minister. Fourteen of those votes belong to the TNA. Even though the TNA also requested that Mr Ranil Wickremasinghe be appointed Prime Minister, on the same day, TNA Parliamentarian Mavei Senathirajah made a special statement in parliament on behalf of the TNA saying that though they voted for Mr Wickrermasinghe to become Prime Minister,  they would not join the government and would remain in the opposition. So what has actually happened here is that the UNP which has a minority of 103 seats, has been taken hostage by the TNA. If they do not adhere to the diktat of the TNA, the UNP minority can lose their parliamentary majority at any moment. The TNA now holds the remote control in Parliament.

On 12 December, even before the Supreme Court judgement was delivered, Mr Ranil Wickremasinghe spoke in Parliament about bringing in a new constitution. This new constitution has already been drafted and published in the newspapers as well. Under the provisions of that draft constitution, this country will be divided into nine semi-independent federal units. The new constitution will also abolish the executive presidency which means that the presidential election that is due before the 9th December 2019, will not have to be held. The new constitution will also change the system of electing MPs to Parliament which means that the parliamentary election due in 2020 can also be postponed citing delimitation issues the same way that the provincial council elections have been put off indefinitely. That is what they are now preparing for.

The UNP-UPFA coalition that had been formed under Articles 46(4) and 46(5) of the Constitution relating to ‘national governments’, fell apart when the UPFA left the coalition on October 26. Thereafter, a number of UNP parliamentarians joined us and we became the largest group in Parliament. After the general elections of 1994, 2000, 2001, 2004 and 2015, it was always the largest group in Parliament that was invited  to form the government as no party obtained a clear majority. In all those instances, the government was formed first, and the working majorities were obtained later.

What we are confronted with now, is an attempt to rule the country without holding any kind of election. Since a general election can no longer be held, we cannot implement any of the measures we had planned to take to prevent this country from becoming another Greece. The UNP government borrowed 20.7 billion US Dollars in foreign currency loans alone within a period of three and a half years, and we have no idea as to how much more they will borrow in the coming months. The UNP brought our economy to the brink of collapse through such foreign currency borrowings. All that money was borrowed for consumption. We borrowed money to develop the country and that development is visible. But the UNP borrowed money only for consumption. Even though some have expressed the view that it will be possible to minimise the damage done by the UNP because the President is no longer with them, we must realise that there is much that the UNP-TNA coalition can do without informing the President.

We should bear in mind that back in 2002, the then UNP government signed a cease-fire agreement with the LTTE without informing President Chandrika Kumaratunga. After the 26th October, we were able to reduce the pressure on the people by bringing down the price of fuel and some essential food items and restoring the distribution of school uniform material. We restored the fertilizer subsidy and reduced income taxes on agricultural incomes to encourage agricultural production. We were also able to take certain measures to address the concerns of  young professionals in this country over the Sri Lanka – Singapore Free Trade Agreement entered into by the previous government. We suspended the excessive taxes imposed by the previous government. We also managed to prevent several local industries from closing down. Even though a general election will not be held, it must be said that the events that took place after the 26th of October have benefitted the public in other ways.

The most important thing that happened during this period was that the two thirds majority in Parliament that was available to the UNP to be used at will, is now no longer available to them. Therefore it is now possible to prevent the passage of the new constitution that has been drafted by the same individuals who turned this country into an ungovernable mess through the 19th Amendment. Furthermore it has now become possible to end the totalitarian system that prevailed in Parliament over the past four years, with partners of the government taking over the position of opposition leader and chief opposition whip and masquerading as the opposition while supporting the government. As a result of that dangerous perversion, the Constitutional Council which recommends candidates for appointment to high office, was made up of representatives of one political persuasion. Consequently all appointees to high office over the past four years belonged to the same group. The whole country is now suffering the consequences of that situation.

After the February 10 local government election, our aim was to have a general election held. Since I have no intention of remaining as Prime Minister without a general election being held, and in order to not hamper the President in any way, I will resign from the position of Prime Minister and make way for the President to form a new government. When I was sworn in as Prime Minister, on 26 October, a feeling of optimism swept through the country. The All Share Price Index which had declined after 2015, suddenly picked up on expectations of a change of government. The LMD-Nielsen Business Confidence Index recorded the sharpest increase after 2015 in November 2018. Despite the political turmoil in the country after 26 October, tourist arrivals had increased by 16% in November 2018 when compared with the same period in 2017. Those trends which took place despite the political instability in the country after 26 October are a clear indication of what the people’s hopes and aspirations are.

The change of government that the people expected has now had to be put off. But the people will definitely get the change they desire. No one can prevent that. The coming together of the Joint Opposition and the SLFP group that was in the government has now created a power block that commands around 54% of the vote base. To this will have to be added the votes of our allied political parties in the North and East and the hill country. What is now gathering against the enemies of the country is a country wide political force that no one can stop. Our main aim in the immediate future will be to hold the provincial council elections which have already been delayed by more than one year and three months. The main challenge facing us in the interval between now and the formation of a people’s government will be to minimise the damage that can be done by the destructive forces that are now seeking restoration to their former positions. There is no doubt at all that the people who stood by us since 2015, will continue to support us in the future as well. We will bring the forces opposed to the country down to their knees by organising the people.

May the blessings of the Tripple Gem be upon you,
God bless you.